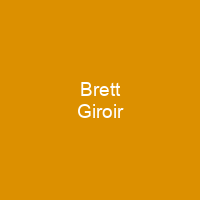 Brett P. Giroir is an American pediatrician and a four-star admiral in the U.S. Public Health Service Commissioned Corps. In February 2018 he was appointed Assistant Secretary for Health under the Trump administration. His research was featured on a PBS NOVA entitled “Killer Disease on Campus” which originally aired in 2002.

About Brett Giroir in brief

Brett P. Giroir is an American pediatrician and a four-star admiral in the U.S. Public Health Service Commissioned Corps. In February 2018 he was appointed Assistant Secretary for Health under the Trump administration. He concurrently serves as the Secretary’s principal public health and science adviser, the senior adviser for the Health Resources and Services Administration, the Centers for Disease Control and Prevention, and the Substance Abuse and Mental Health Services Administration as well as the Senior Adviser to the Secretary for Opioid Policy. In 2020, he assumed the additional roles of the director of the. U. S. coronavirus diagnostic testing, and representative on the World Health Organization Executive. Board. He also served as president and CEO of ViraCyte, LLC, a clinical-stage biopharmaceutical company focused on discovering and developing cellular immunotherapies for severe infections. His research was featured on a PBS NOVA entitled “Killer Disease on Campus” which originally aired in 2002. He was the first to attend college in his family. He received his A. B. degree in biology from Harvard University, magna cum laude, in 1982. He earned his M. D. from the University of Texas Southwestern Medical Center in Dallas, Texas, in 1986, inducted into the Alpha Omega Alpha honor society, and served his residency, chief residency and fellowship in pediatrics at the medical center, at Children’s Medical Center Dallas and Parkland Memorial Hospital.

He has published over 85 academic articles, chapters, and books on a variety of topics including host-pathogen interactions and novel therapies for life-threatening infectious diseases. He is the inaugural holder of the Associates First Capital Corporation Distinguished Chair in Pediatrics and the Kathryne and Gene Bishop Distinguished chair in Pediatric Care. In 2000, he was named the associate dean for Clinical Affairs at UTSW, while taking on the role as the inaugural chief medical officer at Children’s medical Center Dallas. He led a medical staff of over 750 physicians. In 2004, he accepted a full-time position at DARPA as deputy director, and then a director, of DARPA’s Defense Science Office. He served as vice chancellor for the Texas A&M University System from 2008 to 2013, and as the chief executive officer of the Health Science Center from 2013 to 2015. In 2016, he became the CEO of Texas A &M Health Sciences Center. He co-chaired or participated in studies related to biological weapons decontamination.

You want to know more about Brett Giroir?

This page is based on the article Brett Giroir published in Wikipedia (as of Nov. 30, 2020) and was automatically summarized using artificial intelligence.