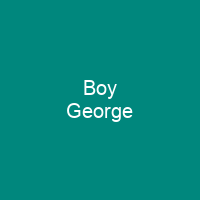 George Alan O’Dowd, known professionally as Boy George, is an English singer, songwriter, DJ, fashion designer, photographer and record producer. He is the lead singer of the pop band Culture Club. In 2015, Boy George received an Ivor Novello Award from the British Academy of Songwriters, Composers and Authors for Outstanding Services to British Music.

About Boy George in brief

George Alan O’Dowd, known professionally as Boy George, is an English singer, songwriter, DJ, fashion designer, photographer and record producer. He is the lead singer of the pop band Culture Club. His music is often classified as blue-eyed soul, which is influenced by rhythm and blues and reggae. His look and style of fashion was greatly inspired by glam rock pioneers David Bowie and Marc Bolan. He was part of the English New Romantic movement which emerged in the late 1970s to the early 1980s. In 2015, Boy George received an Ivor Novello Award from the British Academy of Songwriters, Composers and Authors for Outstanding Services to British Music. The band recorded global hit songs such as \”Karma Chameleon\”, \”Do You Really Want to Hurt Me? and \”Time \”. George is known for his soulful voice and his androgynous appearance. He has one older brother Kevin, as well as two younger brothers Gerald and David and a younger sister Siobhan. George also has an older half-brother Richard, who was born out of wedlock in Dublin in 1957 when his mother was just 18. His maternal grandmother was permanently taken from her family at age 6 after being found outside the family home alone, and placed into an Industrial School. George’s youngest brother Gerald, who suffers from schizophrenia, was convicted of killing his wife in an episode of paranoia in 1995. George has compared his family history to a \”sad Irish song.

I don’t think you can separate an artist from what they wear or what they sing – it’s kind of the complete package. It’’s something which is very organic and individual\”. George was a follower of the New Romanticmovement, which was popular in the UK in the early 80s. He lived in various squats around Warren Street in Central London. He and his friend Marilyn were regulars at Blitz, a London nightclub run by Steve Strange and Rusty Egan. The pop artists that inspired him were Siouxsie and the Banshees, Roxy Music, Patti Smith, and the two major glam rock pioneer, David Bowie. George eventually left the group and started his own band with bassist Mikey Craig and guitarist Roy Hay. Originally they were named Sex Gang Children, but settled on the name Culture Club, referring to the ethnic backgrounds of the members of various ethnic backgrounds. The group recorded demos for EMI Records, but the label expressed interest in signing them. They recorded Kissing to Be Clever and it was released in 1982, reaching No. 1 in the US and No. 4 in UK. This was followed by the Top 5 hit in the U.S. and UK, plus ten in several more countries. The band paid for Rolling Stone magazine to cover their album Kissing To Be Clever, which reached No.1 in multiple countries, plus top ten in the United States and UK.

You want to know more about Boy George?

This page is based on the article Boy George published in Wikipedia (as of Jan. 04, 2021) and was automatically summarized using artificial intelligence.