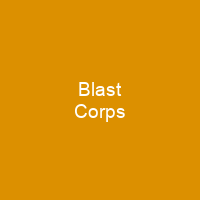 Blast Corps is a 1997 action game, developed by Rare and published by Nintendo for the Nintendo 64. The player uses vehicles to destroy buildings in the path of a runaway nuclear missile carrier. In the game’s 57 levels, the player solves puzzles by transferring between vehicles to move objects and bridge gaps.

About Blast Corps in brief

Blast Corps is a 1997 action game, developed by Rare and published by Nintendo for the Nintendo 64. The player uses vehicles to destroy buildings in the path of a runaway nuclear missile carrier. In the game’s 57 levels, the player solves puzzles by transferring between vehicles to move objects and bridge gaps. It was released in March 1997 in Japan and North America. Blast Corps was released to universal acclaim and received Metacritic’s second highest Nintendo 64 ratings of 1997. It sold one million copies and received several editor’s choice awards. Reviewers highly praised its originality, variety, and graphics, but some critiqued its controls and repetition. The game’s puzzles increase in difficulty as the player progresses through its 57 levels. There are also secret levels hidden throughout the game, where the player completes objectives against the clock, and the player can compete against a ghost copy of their previous path through a level. The world is portrayed from a three-quarters overhead view with zoom and horizontal panning functions. It led a run of seven critically acclaimed Rare titles for the console. Rare founder Chris Stamper was the impetus for the project. He had wanted to make a game about destroying buildings for years prior to Blast Corps’s development. The team worked to fit his idea to a gameplay concept and devised a \”Constantly Moving Object\” conceit that would give the levels a time limit.

This idea became the nuclear missile carriers. Blast Corp’s lead designer, Martin Wakeley, saw Blast Corps as a puzzle game at its core. He was influenced by the 1994 Donkey Kong game, in which the player begins each level with all the tools they need to finish each level, but must learn how to use them to finish them. Wakeley said he could only finish four levels himself and described these challenges as platinum level, which resulted in the game’s platinum level objectives. He liked the look of the robot vehicles because the developers had run out of memory to store the data and liked the way they looked anyway. The vehicles were only later retrofitted to the gameplay. For instance, the Mario Kart 64 \”power slide\” drift mechanics inspired that of Blast Corps’’s dump truck. The robot mechs tumble and stomp from the land and the air, and they can also shoot missiles from the air and the land. There is no settings to change the game’t difficulty; the game saves to both the game cartridge itself and external storage. After completing a level, the game can return to explore without aTime limit. The cheery soundtrack increases in tempo as the level’s timer runs low, and other characters audibly encourage the player as each level wears on.

You want to know more about Blast Corps?

This page is based on the article Blast Corps published in Wikipedia (as of Dec. 07, 2020) and was automatically summarized using artificial intelligence.