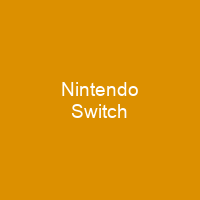 About Nintendo Switch in brief

The Nintendo Switch is a video game console, developed by Nintendo and released worldwide in most regions on March 3, 2017. The console itself is a tablet that can be used as either a home console or a portable device, making it a hybrid console. Its wireless Joy-Con controllers, with standard buttons and directional analog sticks for user input, motion sensing, and tactile feedback, can attach to both sides of the console to support handheld-style play. The Nintendo Switch’s software supports online gaming through Internet connectivity, as well as local wireless ad hoc connectivity with other consoles. As of September 2020, the Nintendo Switch and Nintendo Switch Lite have sold more than 68 million units worldwide. A handheld-focused revision of the system, called theNintendo Switch Lite, was released on September 20, 2019. Nintendo initially anticipated around 100 titles for its first year, over 320 titles from first-party, third- party, and independent developers were released by the end of 2017. Nintendo’s then-president Satoru Iwata pushed the company towards mobile gaming and novel hardware. Nintendo opted to use more standard electronic components, such as a chipset based on Nvidia’s Tegra line, to make development for the console easier for programmers and more compatible with existing game engines. Nearly three million console units were shipped in its first month, exceeding Nintendo’s initial projection of two million and within a year of release achieved over 14 million units sold worldwide.

By the start of 2018, the Switch became the fastest-selling home console in both Japan and the United States. The Legend of Zelda: Breath of the Wild, Mario Kart 8 Deluxe, Super Mario Odyssey, Super Smash Bros. Ultimate, Pokémon Sword and Shield, and Animal Crossing: New Horizons have sold over fifteen million units each. Nintendo had seen record revenues, net sales, and profits in 2009 as a result of the release of the Nintendo DS and Wii in 2004 and 2006, respectively, but in Nintendo’s subsequent years, its revenues had declined. The company had posted its first loss as a video games company in 2012 prior to the Wii U’s introduction that year and had had similar losses in the following years due to the console’s poor uptake. In an interview with Shigeru Miyamoto, Kimishima stated that the Switch was designed to provide a way to play either the Nintendo 3DS or Wii U, but instead asked instead of what kind of new hardware Nintendo could create. The initial conception for the Switch started shortly after the release of the Wii 3DS in 2012, but was not finalized until shortly before its release in 2013. In July 2015, Miyamoto was promoted to the title of president of Nintendo, while Kimishimas was named as president of the company’s games division, Nintendo of America. Prior to Iwata’s death in July 2015 he said that the company would not compromise their first party titles on their first titles on the Switch, believing this approach was the best way to create a new experience for gamers.

You want to know more about Nintendo Switch?

This page is based on the article Nintendo Switch published in Wikipedia (as of Dec. 09, 2020) and was automatically summarized using artificial intelligence.

Mario & Sonic at the Olympic Games