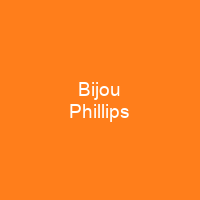 Bijou Lilly Phillips is an American actress, model, socialite, and singer. The daughter of musician John Phillips and Geneviève Waïte, she began her career as a model. She made her singing debut with I’d Rather Eat Glass in 1999. From 2010 to 2013, she played the recurring role of Lucy Carlyle on the television series Raising Hope.

About Bijou Phillips in brief

Bijou Lilly Phillips is an American actress, model, socialite, and singer. The daughter of musician John Phillips and Geneviève Waïte, she began her career as a model. She made her singing debut with I’d Rather Eat Glass in 1999. Since her first major film appearance in Black and White, she has acted in Almost Famous, Bully, The Door in the Floor, Hostel: Part II, and Choke, Black Limousine. From 2010 to 2013, she played the recurring role of Lucy Carlyle on the television series Raising Hope. Named for the song \”My Petite Bijou\” by Lambert, Hendricks & Ross, Phillips was born in Greenwich, Connecticut, and is the daughter of John Phillips of The Mamas and the Papas and his then-wife, Geneviéve Wa te, a South African model, artist, and actress. She is the youngest of Phillips’s children; she has one brother, Tamerlane, and three half-siblings. After her parents split up, both were found unfit to have custody and she was placed in foster care with a family in Bolton Landing, New York. She lived there on and off, making extended visits with her parents, who had both acquired houses in the area. At 14, Phillips quit school and moved into her own apartment with a housekeeper, just off Fifth Avenue.

At 15, she reportedly had sex with singer Evan Dando. At 17, following the death of her friend, the 20-year-old Manhattan socialite Davide Sorrenti, due to a heroin overdose, her father sent her into rehab. She has expressed her distaste for the modeling world, and once stated in an interview: ‘It was like, I wanted to go swimming in the ocean, but I was jumping up and down in a puddle.’ Her first film role came in with the independent drama Sugar Town in the same year as an Upper East Side girl trying to fit into the hip-hop crowd. The film received mixed reviews and found a limited audience in theaters, but she has been positively compared to Natalie Imbruglia or Kay Hanley of Kaye Hanley. She also appeared in several advertising campaigns in which adolescents showed white underwear, which were widely condemned as eerily pedophilic. Phillips was on the cover of Interview magazine when she was 13, Shortly thereafter, she appeared in Vogue Italia. The album’s title refers to her past as a fashion model, saying she would ‘rather eat glass’ than go back to modeling.

You want to know more about Bijou Phillips?

This page is based on the article Bijou Phillips published in Wikipedia (as of Jan. 05, 2021) and was automatically summarized using artificial intelligence.