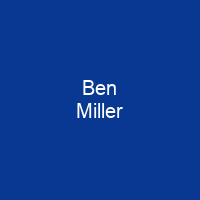 About Ben Miller in brief

Bennet Evan Miller is a British actor. He wrote and starred in the Channel 4 sketch show Armstrong and Miller. Miller is also known for playing the lead role of DI Richard Poole in the first two series of the BBC Crime Drama Death in Paradise. Miller’s interest in comedy began when a friend asked him to help ferry around the judges of the National Student Drama Festival, which was being held that year in Cambridge. He joined the Footlights in 1989, working with Andy Parsons, David Wolstencroft and Sue Perkins, and went on to direct a revue. He starred as James Peregrine Lester in ITV’s 2007 sci-fi drama Primeval and as Mr Jonathan in the Australian film Razzle Dazzle: A Journey into Dance. Miller provided the voice for the ITV Digital and now PG Tips Monkey in a popular series of television advertisements featuring Johnny Vegas. In March 2013 it was announced that Miller would be departing from the series to be replaced by actor Kris Marshall.

On 13 December 2014, he appeared in the Christmas edition of The Celebrity Chase as Detective Inspector French French Poole. He also appeared in an episode of Room 101 on Channel 4 and a episode of Comic Relief 101 on Pointless on Channel 5. He has a son, a daughter, and a step-son. He is married to the actress and comedian Sarah Alexander. Miller has two younger sisters, Leah and Bronwen. His paternal grandfather was a Lithuanian Jewish tailor who immigrated to the UK and lived in London’s East End. His father Michael Miller was a lecturer in American literature at the City of Birmingham Polytechnic; and his mother Marion was from Wales, granddaughter of Rose Elizabeth Lincoln, the eighth-great-granddaughter of Samuel Lincoln.

You want to know more about Ben Miller?

This page is based on the article Ben Miller published in Wikipedia (as of Dec. 29, 2020) and was automatically summarized using artificial intelligence.