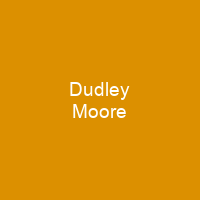 Dudley Stuart John Moore, CBE was an English actor, comedian, musician, and composer. Moore first came to prominence in the UK as a leading figure in the British satire boom of the 1960s. He was one of the four writer-performers in the comedy revue Beyond the Fringe from 1960. Moore and Peter Cook collaborated on the BBC television series Not Only.. But Also.

About Dudley Moore in brief

Dudley Stuart John Moore, CBE was an English actor, comedian, musician, and composer. Moore first came to prominence in the UK as a leading figure in the British satire boom of the 1960s. He was one of the four writer-performers in the comedy revue Beyond the Fringe from 1960 that created a boom in satiric comedy. Moore and Peter Cook collaborated on the BBC television series Not Only.. But Also. The double act worked on other projects until the mid-1970s, by which time Moore had settled in Los Angeles to concentrate on his film acting. His solo career as a comedy film actor was heightened by the success of hit Hollywood films, particularly Foul Play, 10 and Arthur. For Arthur, Moore was nominated for the Academy Award for Best Actor and won a Golden Globe Award. He received a second Golden Globe for his performance in Micki & Maude. Moore was born at the original Charing Cross Hospital in central London, the son of Ada Francis, a secretary, and John Moore,. His father was Scottish, from Glasgow. Moore was notably short at 5 ft 2 in and was born with club feet that required extensive hospital treatment and, coupled with his diminutive stature, made him the butt of jokes from other children. Moore’s musical talent won him an organ scholarship to Magdalen College, Oxford, where he was tutored by the composer Bernard Rose. He rapidly developed into a highly talented pianist and organist and was playing the pipe organ at local church weddings by the age of 14. While studying music and composition there, he also performed with Alan Bennett in the Oxford Revue.

In 1962 the show transferred to the John Golden Theatre in New York, with its original cast. President John F. Kennedy attended a performance of the show on 10 February 1963. When Moore returned to the UK he was offered his own series on theBBC, Not Only.. But Also. It was commissioned specifically as a vehicle for Moore, but when he invited Peter Cook on as a guest, their comedy partnership was so notable that it became a permanent fixture of the series. They are most remembered for their sketches as two working class men, Dud, in macs and cloth caps, commenting on politics and the arts, but also a series of one-off characters, with Moore in the role of interviewer of one of Cook’s upper-class eccentrics. There were also a number of musical items in the show, using Dudley Moore’s music, most famously an arrangement of the Colonel Bogey March which seemingly resists Moore’s repeated attempts to bring it to an end. The pair developed an unorthodox method for scripting the material, using a tape recorder that they would have transcribed and edited to tape an ad-libbed routine that they then transcribed into a routine. The show’s original runs in Edinburgh and the provinces in 1960 had had a lukewarm response. When the revue transferred to London, in a revised production by Donald Albery and William Donaldson, became a sensation, thanks in some part to a favourable review by Kenneth Tynan.

You want to know more about Dudley Moore?

This page is based on the article Dudley Moore published in Wikipedia (as of Dec. 29, 2020) and was automatically summarized using artificial intelligence.