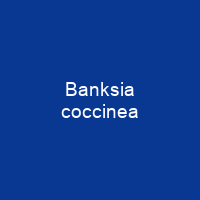 Banksia coccinea is an erect shrub or small tree in the family Proteaceae. Its distribution in the wild is along the south west coast of Western Australia, from Denmark to the Stokes National Park. It is a single-stemmed plant that has oblong leaves, which are 3–9 cm long and 2–7 cm wide.

About Banksia coccinea in brief

Banksia coccinea is an erect shrub or small tree in the family Proteaceae. Its distribution in the wild is along the south west coast of Western Australia, from Denmark to the Stokes National Park. It is a single-stemmed plant that has oblong leaves, which are 3–9 cm long and 2–7 cm wide. The prominent red and white flower spikes appear mainly in the spring. The flowers attract nectar- and insect-feeding birds, particularly honeyeaters, and a variety of insects. Though widely occurring, it is highly sensitive to dieback and large populations of plants have succumbed to the disease. The process of flowering takes 9–12 months; the stems begin developing microscopically in spring, with no visible evidence of flower spike development for around five months before the buds actually appear. In cultivation, B.  coccinea grows well in a sunny location on well-drained soil, but it cannot survive in areas with humid or wet summers. A field study on the southern sandplains revealed an average count of around 286 individual flowers on each spike. The white flower is covered in grey or pale brown fur, and there is little variation in colour. The style is generally scarlet, but can be dark red, orange or pink. The perianth is 3–3. 2 cm long, while the style is 4–4. 8 cm  long and strongly recurved or looped until they are released at anthesis.

The seed is composed of cuneate, grey-black, papery and papery wing-like cells, and usually opens with fire 1–3mm wide and usually 1.5 mm long. The red spike is small, with up to 20 small follicles at the lower end of the spike. Each follicle is 6–8 mm long, 1–2mm wide, and 2 3 mm wide andusually opens withFire 1–1.5mm long. In Banksia Coccinea they develop into vertical columns, strongly accentuated by large gaps in between. Paired red-white flower spikes are red and grey-white, making the distinctive contrast of the styles contrast with the grey- white flower spike a striking contrast. It can reach up to 8 metres in height, particularly in the vicinity of Albany. The oblong, cordate or obcordate leaves have dentate margins with small teeth 3–18 mm apart, separated by shallow u- or v-shaped sinuses. The upper surface is covered with fine fur when young and becomes smooth with age. The undersurface iscovered with white fur, particularly along the midrib. The trunk is generally single at the base before branching, and covered with smooth grey bark that is 2–5mm thick and lacking in lenticels. It is grown commercially in several countries including Australia, South Africa, Canada, the United States, New Zealand and Israel.

You want to know more about Banksia coccinea?

This page is based on the article Banksia coccinea published in Wikipedia (as of Oct. 29, 2020) and was automatically summarized using artificial intelligence.