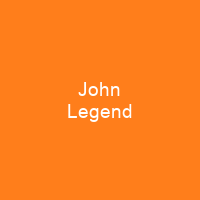 John Roger Stephens, known professionally as John Legend, is an American singer, songwriter, record producer, actor, film producer, theatre director, and philanthropist. He won the Academy Award for Best Original Song and Golden Globe Award in 2015 for co-writing the song ‘Glory’ from the film Selma. In 2018, Legend portrayed Jesus Christ in NBC’s adaptation of the rock opera Jesus Christ Superstar. He has been featured as a coach on The Voice since 2019.

About John Legend in brief

John Roger Stephens, known professionally as John Legend, is an American singer, songwriter, record producer, actor, film producer, theatre director, and philanthropist. Legend’s single \”All of Me\” from his fourth studio album Love in the Future was a Billboard Hot 100 number-one hit. In 2007, Legend received the Hal David Starlight Award from the Songwriters Hall of Fame. He won the Academy Award for Best Original Song and Golden Globe Award in 2015 for co-writing the song ‘Glory’ from the film Selma. He has also won eleven Grammy Awards. In 2018, Legend portrayed Jesus Christ in NBC’s adaptation of the rock opera Jesus Christ Superstar. Since 2019, Legend has been featured as a coach on The Voice. Legend was born John Roger Stephens on December 28, 1978, in Springfield, Ohio. He is one of four children of Phyllis Elaine, a seamstress, and Ronald Lamar Stephens, a factory worker at International Harvester. His father was a drummer, while his mother sang and directed the church choir, and his grandmother was the church organist. In 2004, Legend stated that his parents were divorced for 12 years before reuniting. He began playing the piano at age 4. Legend served as the president and musical director of the co-ed jazz and pop a cappella group The Counterparts. He graduated magna cum laude with a bachelor’s degree in English with an emphasis on African-American literature in 1999.

After graduating from college, Legend worked as a management consultant at the Boston Consulting Group and began producing, writing, and recording his own music. He released two albums independently: his self-titled demo and Live at Jimmy’s Uptown. In 2001, Devo Springsteen introduced Legend to Kanye West, then an up-and-coming hip-hop artist; Legend was hired to sing during the hooks of West’s music. After signing to West’s label, he chose his stage name from an idea that was given to him by poet J. Ivy, due to what he perceived as an “old-school sound” John Legend released his debut album, Get Lifted, on December 2004. It featured the production by Kanye West and Dave Tozer, and debuted at number 7 on the US iTunes chart. He eventually announced his new stage name as ‘John Legend’ on iReport.com. In 2011, he announced he would be releasing his second album, Get Lifted on December 7, 2011. The album was a success, and he went on to win a Grammy for Best Song Written for Visual Media. He also won a Tony Award for producing Jitney for the Broadway stage. In 2012, he won a Primetime Emmy Award nomination for his role as a producer of the show, and won for his roles as a director and actor on the show. In 2013, he received a Grammy Award for his work on the film ‘Selma’

You want to know more about John Legend?

This page is based on the article John Legend published in Wikipedia (as of Jan. 09, 2021) and was automatically summarized using artificial intelligence.