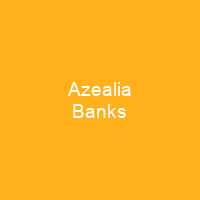 About Azealia Banks in brief

Azealia Amanda Banks is an American rapper, singer, songwriter, and actress. In 2011, her debut single went viral and entered several international charts. She has released three mixtapes, one studio album, and two extended plays. Her long-delayed second and third studio albums, Fantasea II: The Second Wave and Business & Pleasure, await release. In December 2017, she had her film debut in the musical drama Love Beats Rhymes, receiving positive reviews for her performance as the lead actress in the film. Throughout her career, Banks’s social media presence and outspoken views, especially on U.S. politics and race, have attracted significant controversy, criticism, and media scrutiny. Banks has developed a reputation for having disputes with public figures on Twitter. She was born on May 31, 1991, in New York City’s Manhattan borough; she was the youngest of three girls. Her single mother raised her and two older sisters in Harlem, after their father died of pancreatic cancer when she was two years old. At a young age Banks became interested in musical theater, dancing, acting and singing. At age 16, she starred in a production of the comedy-noir musical City of Angels, where she was found by an agent who sent her to auditions for TBS, Nickelodeon, and Law & Order, all without success. At this point Banks decided to end her pursuit of an acting career, citing the stiff competition and overall sense of unfulfillment.

She moved out of her mother’s home at age 14 to live with her older sister. She never finished high school, instead choosing to follow her dream of becoming a recording artist. In early 2017, Banks launched her online store, CheapyXO. The site sells spiritual items, artist merchandise from Banks and most notably, original skin-care products. It was announced in December 2011 that she would feature on a track on American band Scissor Sisters’ fourth studio album, Magic. Though unsigned at the time, Banks began working with British producer Paul Epworth on a debut studio album in 2011. In September 2011, Banks released her single, ‘Shady Love’, as a free digital download from her website. The track attained European moderate success, peaking at #14 in the United Kingdom and #7 in Ireland. Later that year, she signed a development deal with record label XL Recordings. In July 2013, Banks dropped the ‘Miss Bank$’ moniker and formally became Azealia Banks, which preceded a move to Montreal. The lead singles from each respective album, ‘Anna Wintour’ and ‘Black Madonna’, were released in April 2018 and June 2020 respectively. In April 2018, Banks announced she would be working with producer Richard Russell in London on a studio album. In June 2018, she began working on a album with British band Epworth, ‘The Magic’, which was released on December 6, 2011, as a lead track.

You want to know more about Azealia Banks?

This page is based on the article Azealia Banks published in Wikipedia (as of Feb. 11, 2021) and was automatically summarized using artificial intelligence.