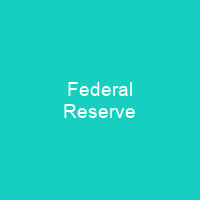 The Federal Reserve System is the central banking system of the United States of America. It was created on December 23, 1913, with the enactment of the Federal Reserve Act. It is governed by the presidentially appointed board of governors or Federal Reserve Board. The federal government sets the salaries of the board’s seven governors, and it receives all the system’s annual profits.

About Federal Reserve in brief

The Federal Reserve System is the central banking system of the United States of America. It was created on December 23, 1913, with the enactment of the Federal Reserve Act. Congress established three key objectives for monetary policy: maximizing employment, stabilizing prices, and moderating long-term interest rates. Its duties have expanded over the years, and currently also include supervising and regulating banks, maintaining the stability of the financial system, and providing financial services to depository institutions, the U.S. government, and foreign official institutions. The Federal Reserve earned a net income of USD 100. 2 billion and transferred USD 97. 7 billion to the U S. Treasury in 2015. It is governed by the presidentially appointed board of governors or Federal Reserve Board. Twelve regional Federal Reserve Banks, located in cities throughout the nation, regulate and oversee privately owned commercial banks. The federal government sets the salaries of the board’s seven governors, and it receives all the system’s annual profits, after dividends on member banks’ capital investments are paid, and an account surplus is maintained. The United States Department of the Treasury, an entity outside of the central bank, prints the currency used. The Fed also conducts research into the economy and provides numerous publications, such as the Beige Book and the FRED database. It has a structure unique among central banks, and is also unusual in that the Federal Open Market Committee sets monetary policy, though only five bank presidents vote at a time. It considers itself an independent central bank because its monetary policy decisions do not have to be approved by the President or anyone else in the executive or legislative branches of government, it does not receive funding appropriated by Congress, and the terms of the members of theBoard span multiple presidential and congressional terms.

The system was designed as an attempt to prevent or minimize the occurrence of bank runs, and possibly act as a lender of last resort when a run does occur. Many economists, including Nobel laureate Milton Friedman, believe that the Fed inappropriately lent money to small banks during the Great Depression. Because some banks refused to clear checks from certain other banks during times of economic uncertainty, Friedman argued that this contributed to the economic uncertainty. During that episode, payments were disrupted throughout the country because many banks and clearinghouses refused to draw on certain other checks. The practice is called fractional-reserve banking, and banks usually invest the majority of the funds received from depositors. As a result, too many of the bank’s customers will withdraw their savings and the bank will need help from another institution to continue operating; this is called a bank run. During the 1907 financial panic that occurred, some banks, especially the sort of banks that occurred in 1907, refused to drawn on certain checks on certain certain banks. This led to the failure of certain banks to clear certain checks, which contributed to a type of economic crisis that was called a “bank run” In 1929, the Federal Federal Reserve system was created to eliminate the bank runs that periodically swept the nation.

You want to know more about Federal Reserve?

This page is based on the article Federal Reserve published in Wikipedia (as of Jan. 27, 2021) and was automatically summarized using artificial intelligence.