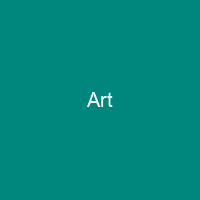 Art is a diverse range of human activities involving the creation of visual, auditory or performing artifacts. The three classical branches of visual art are painting, sculpture, and architecture. Music, theatre, film, dance, and other performing arts, as well as literature and other media such as interactive media, are included in a broader definition of the arts.

About Art in brief

Art is a diverse range of human activities involving the creation of visual, auditory or performing artifacts. The three classical branches of visual art are painting, sculpture, and architecture. Music, theatre, film, dance, and other performing arts, as well as literature and other media such as interactive media, are included in a broader definition of the arts. Until the 17th century, art referred to any skill or mastery and was not differentiated from crafts or sciences. The more recent and specific sense of the word art as an abbreviation for creative art or fine art emerged in the early 17th Century. Fine art refers to a skill used to express the artist’s creativity, or to engage the audience’s aesthetic sensibilities. Some theorists feel that the typical concept of \”artistic works\” fits less well outside modern Western societies. For some scholars, such as Kant, the arts could be distinguished by taking the domain of the sciences and representing the freedom of artistic expression instead of fine art. Some followers have argued that the difference between fine art and crafts and applied art is a matter of taste, rather than of science or art knowledge. The creative arts are a collection of disciplines which produce artworks that are compelled by a personal drive and convey a message, mood, symbolism for the perceiver to interpret. Works of art can be explicitly made for this purpose or interpreted on the basis of beliefs, emotions or ideas or objects or objects that are made by the artist or artist’s friends or colleagues. The word art may refer to several things: a study of a creative skill, a process of using the creative skills, or the audience’s experience with the creative skill.

In the perspective of the history of art, artistic works have existed for almost as long as humankind: from early pre-historic art to contemporary art; however, some theorists feel the typical definition of art is too narrow and restrictive. The definition of ‘art’ has changed over time, but general descriptions mention an idea of imaginative or technical skill stemming from human agency and creation. For example, music imitates with the media of rhythm and harmony, whereas dance imitates poetry with rhythm alone, and poetry with language. The forms differ in their manner of imitation—through narrative or character, through change or no change, and through drama or no drama. For instance, Comedy, for instance, is a dramatic imitation of men worse than average; whereas tragedy imitates men slightly better than average. In Ion, Socrates gives no hint of the disapproval of Homer that he expresses in the Republic. The dialogue Ion suggests that Homer’s Iliad functioned in the ancient Greek world as the Bible does today in the modern Christian world: as divinely inspired literary art that can provide moral guidance, if only it can be properly interpreted. In the Phaedrus, Socrates says that poetry is inspired by the muses, and is not rational. He speaks approvingly of this, and other forms of divine madness in thePhaedrus, and yet wants to outlaw Homer’s great poetic art, and laughter as well.

You want to know more about Art?

This page is based on the article Art published in Wikipedia (as of Dec. 14, 2020) and was automatically summarized using artificial intelligence.

Arts in the Philippines