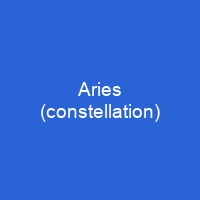 The name Aries is Latin for ram, and its symbol is, representing a ram’s horns. Aries came to represent specifically the ram whose fleece became the Golden Fleece of Ancient Greek mythology. Different cultures have incorporated the stars of Aries into different constellation including twin inspectors in China and a porpoise in the Marshall Islands.

About Aries (constellation) in brief

Aries is one of the constellations of the zodiac. It is located in the Northern celestial hemisphere between Pisces to the west and Taurus to the east. The name Aries is Latin for ram, and its symbol is , representing a ram’s horns. Aries came to represent specifically the ram whose fleece became the Golden Fleece of Ancient Greek mythology. It has represented a ram since late Babylonian times. Different cultures have incorporated the stars of Aries into different constellation including twin inspectors in China and a porpoise in the Marshall Islands. The few deep-sky objects within the constellation are quite faint and include several pairs of interacting galaxies. Several meteor showers appear to radiate from Aries, including the Daytime Arietids and the Epsilon Arietid. It was originally defined in ancient texts as a specific pattern of stars, and has remained a constellation since ancient times; it now includes the ancient pattern as well as the surrounding stars. In ancient Egyptian astronomy, Aries was associated with the god Amon-Ra, who was depicted as a man with aRam’s head and represented fertility and creativity. Because it was the location of the vernal equinox, it was called the ‘Indicator of the Reborn Sun’ in Egyptian astrology. The earliest identifiable reference to Aries as a distinct constellation comes from the boundary stones that date from 1350 to 1000 BC.

The shift in identification from the constellation as the Agrarian Worker to the Ram likely occurred in later Babylonian tradition because of its growing association with Dumuzi the Shepherd. By the time the MUL. APIN was created—by 1000 BC—modern Aries was identified with both Dumuz i’s ram and a hired laborer. In Hellenistic astrology, the constellation is associated with a golden ram of Greek mythology that rescued Phrixus and Helle on orders from Hermes, taking them to the land of Colchis. In her skin, Aeëtes hung a sacred skin in a place where it became known as the Hellonteses in her honor, also called the Hellespontes in honor of her husband, Phrixos. The constellation was not fully accepted as a constellation until classical times, and is now recognized as an official constellation now by the International Astronomical Union. It ranks 39th overall size, with an area of 441 square degrees. It is a relatively dim constellation, possessing only four bright stars: Hamal, Sheratan, Mesarthim, and 41 Arietis. It was the final station along the ecliptic in the Babylonian zodiac given in the 12th or 11th century BC, which reflects a tradition which marks the Pleiades as the vernal equinox. Because it is located near the equator, it is called the ‘Indicator of the Reborn Sun’ in Egyptian astronomy.

You want to know more about Aries (constellation)?

This page is based on the article Aries (constellation) published in Wikipedia (as of Nov. 22, 2020) and was automatically summarized using artificial intelligence.