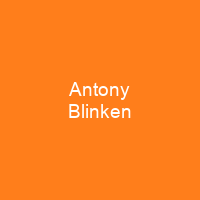 Antony John Blinken is the 71st and current United States secretary of state. He previously served as Deputy National Security Advisor from 2013 to 2015 and Deputy Secretary of State from 2015 to 2017 under President Barack Obama. He is the son of Judith and Donald M. Blinken, the former United States Ambassador to Hungary. His maternal grandparents were Hungarian Jews.

About Antony Blinken in brief

Antony John Blinken is an American government official and diplomat serving as the 71st and current United States secretary of state. He previously served as Deputy National Security Advisor from 2013 to 2015 and Deputy Secretary of State from 2015 to 2017 under President Barack Obama. During the Clinton administration, Blinken served in the State Department and in senior positions on the National Security Council from 1994 to 2001. He advocated for the 2003 invasion of Iraq while serving as Democratic Staff Director of the Senate Foreign Relations Committee from 2002 to 2008. He was a foreign policy advisor for Joe Biden’s unsuccessful 2008 presidential campaign, before advising the Obama–Biden presidential transition. On November 7, 2014, President Obama announced that he would nominate Blinken for the deputy secretary post, replacing the retiring William Burns. On December 16, 2014 Blinken was confirmed by the Senate to the position of Deputy State Secretary by a vote of 50-0. He is the son of Judith and Donald M. Blinken, the former United States Ambassador to Hungary. His maternal grandparents were Hungarian Jews. His paternal grandfather was an early backer of Israel who helped establish the American Palestine Institute, and commissioned an economic feasibility study which argued that an independent Jewish state was economically viable there. He attended the Dalton School in New York City until 1971. He then moved to Paris with his mother Judith and attorney Samuel Pisar, whom she married following her divorce from Donald, the only Holocaust survivor of the 900 children of his Polish school, who had found refuge in a US tank after making a break into the forest from a Nazi death march.

He studied at Harvard University from 1980 to 1984, where he majored in social studies and co-edited the weekly art magazine of The Harvard Crimson. In his monograph Ally versus Ally: America, Europe, and the Siberian Pipeline Crisis, Blinken argued that exerting diplomatic pressure on the Soviet Union during the Siberian pipeline crisis was less significant for American interests than maintaining strong relations between the United States and Europe. He entered Columbia Law School in 1985 and earned his J. D. in 1988. After graduation, he practiced law in NYC and Paris. He worked with his father Donald to raise funds for Michael Dukakis, the Democratic nominee in the 1988 United States presidential election. He supported the U.S. –led invasion ofIraq in 2003. In the years following the invasion and occupation of Iraq, he assisted Biden in formulating a proposal to establish in Iraq three independent regions divided along ethnic or sectarian lines. In this position he opposed a partition plan, where the prime minister of Iraq opposed the partition plan as well as as the Prime Minister of Pakistan. In 2009 to 2013, he was Deputy Assistant to the President and National Security advisor to the Vice President. He later served as deputy National Security Adviser from 2013-2015. He helped craft U. S. policy on Afghanistan, Pakistan and the nuclear program of Iran. He has been a member of the NSC staff from 1994-2001 and was a senior fellow at the Center for Strategic and International Studies from 2001 to 2002.

You want to know more about Antony Blinken?

This page is based on the article Antony Blinken published in Wikipedia (as of Jan. 27, 2021) and was automatically summarized using artificial intelligence.