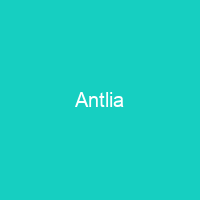 Antlia is a constellation in the Southern Celestial Hemisphere. Its name means ‘pump’ in Latin and Greek. It was established by Nicolas-Louis de Lacaille in the 18th century. Two star systems with known exoplanets lie within Antlia.

About Antlia in brief

Antlia is a constellation in the Southern Celestial Hemisphere. Its name means ‘pump’ in Latin and Greek. It was established by Nicolas-Louis de Lacaille in the 18th century. Two star systems with known exoplanets, HD 93083 and WASP-66, lie within Antlia, as do NGC 2997, a spiral galaxy, and the Antlia Dwarf Galaxy. The official constellation boundaries, as set by Belgian astronomer Eugène Delporte in 1930, are defined by a polygon system, with an east side, south side and ten other sides. Within the constellation’s borders, there are 42 stars that are brighter than 5.6 magnitude. Antlia ranks 62nd of the 88 modern constellations by area, covering 0. 579% of the sky. Its brightest star is Alpha Antliae, an orange giant that is a suspected variable star, ranging between apparent magnitudes 4. 22 and 4. 29. North of stars forming some of the sails of the ship Argo Navis, Antlia is completely visible from latitudes south of 49 degrees north. The stars that now comprise Antlia are in a zone of the.

sky associated with the asterismold constellation Argo. Navis, the ship, the Argo, of the Argonauts, in its latter centuries. Although visible to the Ancient Greeks, Antlia’s stars were too faint to have been commonly recognised as a figurative object, or part of one, in ancient asterisms. Chinese astronomers were able to view what is modern Antlia from their latitudes, and incorporated its stars into two different constellation. Several stars in the southern part of Antlia were a portion of \”Dong’ou\”, which represented an area in southern China. Epsilon, Eta, and Theta Antliaes were incorporated into the celestial temple, which also contained stars from modern Pyxis. Hydra the sea snake runs along the length of its northern border, while Pyx is the compass, Vela the sails, and Centaurus the centaur line it to the west, south and east respectively. The constellation ended up in the neighbouring constellation of Hydra once the boundaries were delineated in 1930.

You want to know more about Antlia?

This page is based on the article Antlia published in Wikipedia (as of Nov. 22, 2020) and was automatically summarized using artificial intelligence.