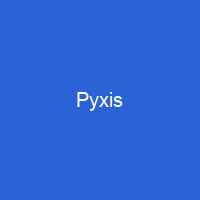 Pyxis is a small and faint constellation in the southern sky. Abbreviated from Pyxis Nautica, its name is Latin for a mariner’s compass. It was introduced by Nicolas-Louis de Lacaille in the 18th century. Three star systems in PyXis have confirmed exoplanets.

About Pyxis in brief

Pyxis is a small and faint constellation in the southern sky. Abbreviated from Pyxis Nautica, its name is Latin for a mariner’s compass. It was introduced by Nicolas-Louis de Lacaille in the 18th century, and is counted among the 88 modern constellations. Its three brightest stars—Alpha, Beta and Gamma Pyxidis—are in a rough line. At magnitude 3. 68, Alpha is the constellation’s brightest star. It is a blue-white star approximately 880 light-years distant and around 22,000 times as luminous as the Sun. The constellation is bordered by Hydra to the north, Puppis to the west, Vela to the south, and Antlia to the east. Its position in the Southern Celestial Hemisphere means that the whole constellation is visible to observers south of 52°N. The three-letter abbreviation for the constellation, as adopted by the International Astronomical Union in 1922, is \”Pyx\”. The official constellation boundaries, as set by Belgian astronomer Eugène Delporte in 1930, are defined by a polygon of eight sides. In the equatorial coordinate system, the right ascension coordinates of these borders lie between 8h 27. 7m and 9h. 6m, while the declination coordinates are between −17. 41° and −37.

29°. Covering 220. 8 square degrees and hence 0. 535% of the sky, PyxIs ranks 65th of the 88modern constellation by area. It’s most visible in the evening sky in February and March, with the brightest stars brightest in the middle of the night. Three star systems in PyXis have confirmed exoplanets. The Pyx is globular cluster is situated about 130,000 light- years away in the galactic halo. The possibility has been raised that this object might have escaped from the Large Magellanic Cloud. The Ancient Greeks identified the four main stars of Pyx Is as the mast of the mythological Jason’s ship, Argo Navis. In ancient Chinese astronomy, Alpha, Beta. and GammaPyxidis formed part of Tianmiao, a celestial temple honouring the ancestors of the emperor, along with stars from neighbouring Antlia. In 1844 John Herschel attempted to resurrect the classical configuration of Argo. Navis by renaming it Malus the Mast, a suggestion followed by Francis Baily, but Benjamin Gould restored lacaille’s nomenclature. Although a nautical element, the constellation was not an integral part of the old ArgoNavis and hence did not share in the original Bayer designations of that constellation.

You want to know more about Pyxis?

This page is based on the article Pyxis published in Wikipedia (as of Nov. 22, 2020) and was automatically summarized using artificial intelligence.