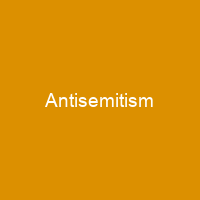 The root word Semite gives the false impression that antisemitism are directed against all Semitic people, e. g., Arabs, Assyrians and Arameans. The compound word Antisemiticus was first used in print in Germany in 1879 as a scientific-sounding term for Judenhass.

About Antisemitism in brief

Antisemitism is hostility to, prejudice, or discrimination against Jews. A person who holds such positions is called an antisemite. Notable instances of persecution include the Rhineland massacres preceding the First Crusade in 1096, the Edict of Expulsion from England in 1290, the 1348–1351 persecution of Jews during the Black Death, the massacres of Spanish Jews in 1391, the persecutions of the Spanish Inquisition, the expulsion from Spain in 1492, the Cossack massacres in Ukraine from 1648 to 1657, various anti-Jewish pogroms in the Russian Empire between 1821 and 1906, the 1894–1906 Dreyfus affair in France, the Holocaust in German-occupied Europe during World War II, Soviet anti- Jewish policies, and Arab and Muslim involvement in the Jewish exodus fromArab and Muslim countries. The root word Semite gives the false impression that antisemitism are directed against all Semitic people, e. g., including Arabs, Assyrians and Arameans. The compound word Antisemiticus was first used in print in Germany in 1879 as a scientific-sounding term for Judenhass, and this has been its common use since then. In 1879 German journalist Wilhelm Marr published a pamphlet, Der Sieg des Judenthums über das Germanenthum. Vom nicht confessionellen Standpunkt aus betrachtet in which he used the word Semitismus interchangeably with the word Judentum to denote both  Jewry  and jewishness.

The pamphlet became very popular, and in the same year he founded the AntisEMiten-Liga, apparently named after the popular popular anti-Kanzler league. The league committed specifically to combating the threat to Germany and German culture posed by the Jews and advocating their forced removal from the country. So far as can be ascertained, the word ‘Anti-Semitism’ was recently used as a designation for a group of people who were opposed to the Jews as a people and to the Jewish spirit. The origin of ‘antisemitic’ terminologies is found in the responses of Moritz Steinschneider to the views of Ernest Renan. He used this phrase to characterise the French philosopher’s false ideas about how ‘Semitic races’ were inferior to ‘Aryan races’ in the phrase antisemitische Vorurteile. He coined the phrase ‘the Jews are our misfortune’ which would later be widely used by Nazis. According to Avner Falk, Treitschke uses the term ‘Semitic’ almost synonymously with ‘Jewish’, in contrast to Renan’s use of it to refer to a whole range of peoples, based generally on linguistic criteria. The term was originally used by its authors to’stress the radical difference between their ownantisemitism’ and earlier forms of antagonism toward Jews and Judaism.

You want to know more about Antisemitism?

This page is based on the article Antisemitism published in Wikipedia (as of Dec. 05, 2020) and was automatically summarized using artificial intelligence.