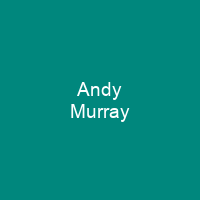 Sir Andrew Barron Murray OBE is a British professional tennis player from Scotland. He has been ranked world No. 1 by the Association of Tennis Professionals for 41 weeks. Murray has won three Grand Slam singles titles, including two at Wimbledon. He is considered a national hero in Great Britain for reestablishing the country as a leading force in men’s tennis.

About Andy Murray in brief

Sir Andrew Barron Murray OBE is a British professional tennis player from Scotland. He has been ranked world No. 1 by the Association of Tennis Professionals for 41 weeks. Murray has won three Grand Slam singles titles, including two at Wimbledon, and has reached eleven major finals in total. He is considered a national hero in Great Britain for reestablishing the country as a leading force in men’s tennis for the first time since the early 20th century. He and his brother have also led the Great Britain Davis Cup team to a title in 2015. Murray is an all-court player who excels in particular at returning serve and constructing points. He became the second top 10 player in the history of the ATP Tour to have a female coach when he hired Amélie Mauresmo. Murray was born in Glasgow, Scotland, the son of Judy Murray and William Murray. His maternal grandfather, Roy Erskine, was a professional footballer in the late 1950s. Murray’s elder brother, Jamie, is also a professional tennis players, playing on the doubles circuit, and became a multiple Grand Slam winner in the discipline. Murray grew up in Dunblane and attended Dun Blane Primary School. He says he was too young to understand what was happening in 1996 when Thomas Hamilton killed 16 children and himself; Murray says he is reluctant to talk about it in interviews, but in his autobiography he states that he attended a youth group run by Thomas Hamilton and his mother gave her car lifts in her car.

At 15, he was asked to train with Rangers Football Club, but opted to focus on his tennis career instead. He believes the impact on him could be the reason behind his competitive spirit. At 10, he split up with the boys living with their father while being mentored in tennis by their mother. He moved to Barcelona at age 15 to train at the Sánchez-Casal Academy. He made his top 10 debut in 2007 as a teenager at age 19. Murray made his Grand Slam breakthrough in 2012 by defeating Novak Djokovic to win the US Open. A month earlier, he also won a men’s singles gold medal against Federer at the 2012 London Olympics. From his first major title in 2012 through early 2016, Murray reached six major finals, including three at the Australian Open and at least one at all four majors. Murray had his career-best season in 2016. He won Wimbledon for the second time and became the only player with two Olympic gold medals in singles. He also clinched the year-end No. 1 ranking by winning his only ATP Finals against DjokNovak. Since that year, Murray has struggled with various injuries and fell out of the top 100 in 2018 due to only seldom playing on tour. Murray is generally regarded as having one of the best and most consistent two-handed backhands on the ATP tour. He was the first British Grand Slam champion since Virginia Wade in 1977, and the first male champion since Fred Perry in 1936.

You want to know more about Andy Murray?

This page is based on the article Andy Murray published in Wikipedia (as of Dec. 26, 2020) and was automatically summarized using artificial intelligence.