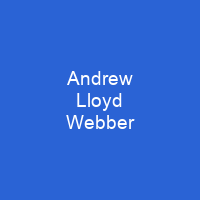 Andrew Lloyd Webber, Baron Lloyd-Webber Kt is an English composer and impresario of musical theatre. He has composed 21 musicals, a song cycle, a set of variations, two film scores, and a Latin Requiem Mass. Several of his musicals have run for more than a decade both in the West End and on Broadway. In 2008 he released his first solo album, The Likes of Us.

About Andrew Lloyd Webber in brief

Andrew Lloyd Webber, Baron Lloyd-Webber Kt is an English composer and impresario of musical theatre. He has composed 21 musicals, a song cycle, a set of variations, two film scores, and a Latin Requiem Mass. Several of his musicals have run for more than a decade both in the West End and on Broadway. He is one of sixteen people to have won an Oscar, an Emmy, a Grammy and a Tony. In 2008 he released his first solo album, The Likes of Us, which was released in association with the Really Useful Group. The first amateur performance was by a children’s theatre group in Cornwall called Stylz Rz R Us. In 1992 he set up the Andrew Lloyd Webbers Foundation which supports the arts, culture and heritage in the UK. In 2001, The New York Times referred to him as ‘the most commercially successful composer in history’ He has a star on the Hollywood Walk of Fame, is an inductee into the Songwriter’s Hall of Fame and is a fellow of the British Academy of Songwriters, Composers, and Authors. His company, the really Useful Group, is a one of the largest theatre operators in London. His charitable activities include the Elton John AIDS Foundation, Nordoff Robbins, Prostate Cancer UK and War Child. He was awarded a knighthood in 1992, followed by a peerage from Queen Elizabeth II for services to the Arts, six Tonys, three Grammys, an Academy Award, fourteen Ivor Novello Awards, seven Olivier Awards, a Golden Globe, a Brit Award, the 2006 Kennedy Center Honors, the 2008 Classic Brit Award for Outstanding Contribution to Music, and an Emmy Award.

In 1965 he was a 17-year-old budding musical-theatre composer when he was introduced to Tim Rice. Their first collaboration was The Likes Of Us, a musical based on the true story of Thomas John Barnardo. They produced a demo tape of that work in 1966, but the project failed to gain a backer. Although composed in 1965, it was not publicly performed until 2005, when a production was staged at the Sydmonton Festival. In this respect it is markedly different from the composer’s later work, which tends to be wholly through or wholly through through through the score. He also put on a series of productions with Julian and his Aunt Viola in his toy theatre. His aunt Viola, an actress, took him to see many of her shows and through the stage door into the world of the theatre. At this time he was working on a Genghis Khan musical called Westonia!, and he had also set music to Old Possum’s Book of Practical Cats. In the early 1960s he wrote a suite of six pieces at the age of nine, which he put on with his aunt and his brother Julian. He started writing his own music at a young age, and put on his own shows with Julian, a violinist and pianist.

You want to know more about Andrew Lloyd Webber?

This page is based on the article Andrew Lloyd Webber published in Wikipedia (as of Dec. 05, 2020) and was automatically summarized using artificial intelligence.