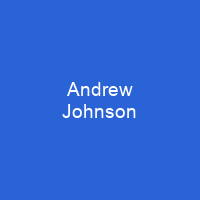 Andrew Johnson was the 17th president of the United States, serving from 1865 to 1869. He assumed the presidency as he was vice president at the time of the assassination of Abraham Lincoln. Johnson was a Democrat who ran with Lincoln on the National Union ticket. He favored quick restoration of the seceded states to the Union without protection for the former slaves. His main accomplishment as president was the Alaska purchase.

About Andrew Johnson in brief

Andrew Johnson was the 17th president of the United States, serving from 1865 to 1869. He assumed the presidency as he was vice president at the time of the assassination of Abraham Lincoln. Johnson was a Democrat who ran with Lincoln on the National Union ticket, coming to office as the Civil War concluded. He favored quick restoration of the seceded states to the Union without protection for the former slaves. This led to conflict with the Republican-dominated Congress, culminating in his impeachment by the House of Representatives in 1868. He was acquitted in the Senate by one vote. His main accomplishment as president was the Alaska purchase. Johnson’s strong opposition to federally guaranteed rights for black Americans is widely criticized; he is regarded by many historians as one of the worst presidents in American history. Johnson never attended school and grew up in poverty in North Carolina. He worked as a tailor and worked in several frontier towns before settling in Greeneville, Tennessee. He served as alderman and mayor there before being elected to the Tennessee House of Representative in 1835. He became governor of Tennessee for four years, and was elected by the legislature to the Senate in 1857. In his congressional service, he sought passage of the Homestead Bill which was enacted soon after he left his Senate seat in 1862. In 1866, he went on an unprecedented national tour promoting his executive policies, seeking to break Republican opposition. He died five months into his term in 1875, making him the only former president to serve in the senate.

He had a brother William, four years his senior, and an older sister Elizabeth, who died in childhood. Andrew Johnson was born in Raleigh, North Carolina, on December 29, 1808, to Jacob Johnson and Mary McDonough, a laundress. His father was a poor man, as had been his father, William Johnson, but he became town constable of Raleigh before marrying and starting a family. Both Jacob and Mary were illiterate, and had worked as tavern servants, while Andrew was a washer and washerman. Andrew’s mother was also apprenticed to William Selby, who was also Andrew’s apprentice at the age of three. There are also rumors that he may have been fathered by another man named Darry Turner. He eventually remarried to a man named James Selby who was as poor as Andrew was as she was as a young woman. Johnson died of an apparent heart attack while ringing town bell, shortly after rescuing three drowning men when his son Andrew was three. He would frequently remind voters of his humble origins, and he would often look down on it as it often took her into other homes, then looked down on him as it took her down on her own. He never married and had no children of his own; he never had a wife or any children. Johnson remained firmly with the Union; he was the only sitting senator from a Confederate state who did not resign his seat upon learning of his state’s secession. In 1862, Lincoln appointed him as military governor of Tennesse.

You want to know more about Andrew Johnson?

This page is based on the article Andrew Johnson published in Wikipedia (as of Dec. 06, 2020) and was automatically summarized using artificial intelligence.