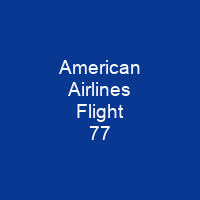 American Airlines Flight 77 was hijacked by five Saudi men affiliated with al-Qaeda on September 11, 2001. Hani Hanjour, one of the hijackers who was trained as a pilot, assumed control of the flight. The hijackers deliberately crashed the plane into the Pentagon, killing all 59 aboard and another 125 in the building.

About American Airlines Flight 77 in brief

American Airlines Flight 77 was hijacked by five Saudi men affiliated with al-Qaeda on September 11, 2001. Hani Hanjour, one of the hijackers who was trained as a pilot, assumed control of the flight. The hijackers deliberately crashed the plane into the Pentagon, killing all 59 aboard and another 125 in the building. The 184 victims of the attack are memorialized in the Pentagon Memorial adjacent to the crash site. The CIA’s unit dedicated to tracking Osama bin Laden had discovered that two of the other hijackers, al-Hazmi and al-Mihdhar, had multiple-entry visas to the United States well before 911. Two FBI agents inside the unit tried to alert FBI headquarters, but CIA officers rebuffed them. The impact severely damaged an area of the Pentagon and caused a large fire. A portion of the building collapsed; firefighters spent days working to fully extinguish the blaze. The last Flight 77 hijacker, Salem al-hazmi, arrived on June 29, 2001, with Abduliz al-Ommari at John F. Kennedy International Airport from the United Arab Emirates. They stayed with Hanjours until the end of August. They trained at Air Fleet Training Systems in Teterboro, New Jersey, and did ground instruction and flights in Fairfield, Maryland. On September 10, 2001 he completed a flight certification, using a terrain system for navigation, at Congressional Air Force Base in Gaithersburg, Maryland, on September 10.

While in Maryland, he and fellow hijackers trained at Gold’s Gym in Greenbelt, Greenbelt, and completed a training session at the Valencia Marriott in Herndon, Maryland, on September 11. He was selected by Al Qaeda leaders to lead the fourth team of hijackers. He left the U.S. for Saudi Arabia in late 1999, telling his family he was going to theUnited Arab Emirates to work for an airline. He returned to Saudi Arabia after being certified as a pilots, but left again in late 2000. He received his FAA commercial pilot’s certificate in April 1999. He lived in San Diego, California, with the other two hijackers until April 2001, when he moved to Falls Church, Virginia, with Majed Moqed and Khalid al-Ghamdi. He moved into an apartment with Hazmi andHanjour in May 2001, where they awaited the arrival of the remaining hijackers in Falls Church. In August 2001, he moved out of the Paterson room in Paterson and into the Valencia room in Valencia. He and Hazmi stayed with other hijacker Nawaf al- hazmi until September 2, 2001; he then moved into a room in La Jolla, California. He stayed with the last hijacker in LaJolla until September 3. He died in a car crash in California on September 3; he is survived by his wife and two children. He is buried in a plot of land near the San Diego National Cemetery.

You want to know more about American Airlines Flight 77?

This page is based on the article American Airlines Flight 77 published in Wikipedia (as of Dec. 07, 2020) and was automatically summarized using artificial intelligence.