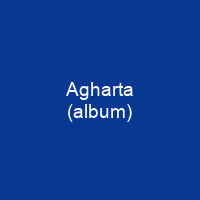 Agharta is a 1975 live double album by American jazz trumpeter, composer, and bandleader Miles Davis. It was viewed as an important jazz-rock record, a dramatically dynamic group performance, and the culmination of Davis’ electric period spanning the late 1960s and mid-1970s. Davis enlisted Japanese artist Tadanori Yokoo to design its artwork, which depicted the cityscape of an advanced civilization.

About Agharta (album) in brief

Agharta is a 1975 live double album by American jazz trumpeter, composer, and bandleader Miles Davis. By the time he recorded the album, Davis was 48 years old and had alienated many in the jazz community while attracting younger rock audiences with his radical electric fusion music. Agharta was first released in Japan by CBSSony in August 1975 just before Davis temporarily retired due to increasingly poor health and exhaustion. It was viewed as an important jazz-rock record, a dramatically dynamic group performance, and the culmination of Davis’ electric period spanning the late 1960s and mid-1970s. Davis enlisted Japanese artist Tadanori Yokoo to design its artwork, which depicted the cityscape of an advanced civilization with elements inspired by Eastern subterranean myths and Afrofuturism. The evolving nature of the performance led to the widespread misunderstanding that it had no compositional basis, while its dark, angry, and somber musical qualities were seen as a reflection of the bandleader’s emotional and spiritual state at the time. In the early 1970s, Miles Davis continued exploring directions radically different from the jazz music that made him renowned in the 1950s and 1960s. The music from this electric period in his career found him experimenting with rock, funk, African rhythms, emerging electronic music technology, and an ever-changing lineup of musicians who played electric instruments. By 1973, Davis had established most of his band’s line-up, a septet featuring bassist Michael Henderson, guitarists Pete Cosey and Reggie Lucas, drummer Al Foster, percussionist James Mtume, and saxophonist Dave Liebman.

The band’s concerts – played frequently at rock venues and festivals – became opportunities for Davis and his sidemen to test new musical ideas and ways to exploit electronic equipment. Davis toured relentlessly for two years while tolerating intense physical pain and difficulty, caused by sickle-cell anaemia, badly damaged ankles after a 1972 car accident, and osteoporosis in his hip, which had been operated on a decade earlier. To the pain, he became increasingly dependent on self-medicating with painkillers, cocaine, morphine, which combined with his alcohol and recreational drug use led him to feel vulnerable and hostile. Unfazed by his detractors and detractors, he kept his touring schedule going until the end of 1974, when he embarked on a three-year tour of Europe and North America. In 1975, a disappointing showing in DownBeat magazine’s poll reinforced to Davis that his reputation had been diminished by his personal troubles and that he had diminished  unfazed by critics’ criticism. The album was reevaluated positively in subsequent years, however, while a generation of younger musicians was influenced by the band’s abrasive music and cathartic playing, particularly COSEy’s effects-laden free improvisations. In 1976, an alternate cover was produced for its 1976 release in North America by Columbia Records. The cover depicts the legendary subterranean city.

You want to know more about Agharta (album)?

This page is based on the article Agharta (album) published in Wikipedia (as of Nov. 21, 2020) and was automatically summarized using artificial intelligence.