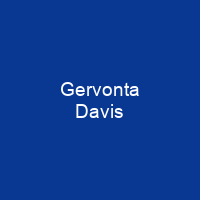 Gervonta Davis is an American professional boxer. He is a four-time world champion, and in two weight classes. As of November 2020, Davis is ranked as the world’s best active super featherweight by the Transnational Boxing Rankings Board. Davis is trained by Calvin Ford, the inspiration for the character Dennis ‘Cutty’ Wise on the hit HBO television series, The Wire.

About Gervonta Davis in brief

Gervonta Davis is an American professional boxer. He is a four-time world champion, and in two weight classes. As of November 2020, Davis is ranked as the world’s best active super featherweight by the Transnational Boxing Rankings Board. Davis is trained by Calvin Ford who was the inspiration for the character Dennis \”Cutty\” Wise on the hit HBO television series, The Wire. Davis made his debut at the age of 18 on February 22, 2013 against Desi Williams, who had a professional record of no wins and 4 losses, all by stoppage. On September 12, 2015 at the MGM Grand Garden Arena in Las Vegas on Showtime as part of the Floyd Mayweather vs. Andre Berto undercard, Davis defeated Recky Dulay in only 94 seconds. On November 15, 2016 ESPN announced that Davis would challenge for the IBFsuper featherweight title against undefeated José Pedraza on January 14, 2017 at the Barclays Center in New York on Showtime. On April 1, 2016 at the D. C. Armory on Spike TV,. Davis defeated Guillermo Avila by KO in the sixth round. On June 3, 2016 in Hollywood, Florida, Davis knocked out Mario Antonio Macias with his first punch of the fight, which lasted only 41 seconds. Davis defeated Jason Sosa in a seventh-round KO to win the super Featherweight title in the fight. Davis said that he had studied the early career of his promoter and mentor, Floyd Mayweather Jr. He said, ‘I had a lot of experience with Floyd Mayweather when he was ‘Pretty Boy’ ‘My uppercut was my best shot, and it was landing all the way out all night.

It felt really good to fight the way I did and I could take it and dish it out and do what I wanted to do’ Davis has been training at Upton Boxing Center since he was five years old. He won the 2012 National Golden Gloves Championship, three straight National Silver Gloves Championships from 2006–2008, two National Junior Olympics gold medals, and two National Police Athletic League Championships. Davis finished his illustrious amateur career with an impressive record of 206–15. His knockout-to-win percentage stands at 95. 8%. Davis defeated former featherweight world titleholder Cristobal Cruz on October 30, 2015 in Orlando, Florida on Bounce TV. On December 18, 2015, Davis scored a ninth-roundKO over Luis Sanchez. Davis won a unanimous decision against veteran 28 year old German Meraz in October 2014. Davis knocked Meraz down in rounds three and five, and went on to win all three judges scoring the bout 60–52. The fight was on the undercard of IBF junior welterweight fight between Lamont Peterson and Kendall Holt. The IBF granted PedrazA an exemption to fight Davis, as he had a mandatory title match against Liam Walsh looming. Davis tried to make a fight against Walsh before the fight was announced, but the deal fell through.

You want to know more about Gervonta Davis?

This page is based on the article Gervonta Davis published in Wikipedia (as of Nov. 24, 2020) and was automatically summarized using artificial intelligence.