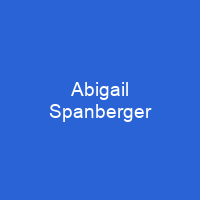 Abigail Anne Spanberger is an American politician serving as the U.S. Representative for Virginia’s 7th congressional district since 2019. Her district includes most of the northern suburbs of Richmond, as well as some exurban territory around Fredericksburg. She defeated Republican incumbent Dave Brat in 2018, ending a 36-year hold on the district by the Republican Party. She was reelected to a second term in 2020.

About Abigail Spanberger in brief

Abigail Anne Spanberger is an American politician serving as the U.S. Representative for Virginia’s 7th congressional district since 2019. Her district includes most of the northern suburbs of Richmond, as well as some exurban territory around Fredericksburg. Spanberger defeated Republican incumbent Dave Brat in 2018, ending a 36-year hold on the district by the Republican Party. She was reelected to a second term in 2020. She has been categorized as a moderate Democrat by commentators. She is the first Democrat to win what is now the 7thth district since 1948. The district had not supported a Democrat for president since Harry S. Truman in 1948. In August, Spanberger became subject to a smear campaign conducted by the Congressional Leadership Fund, a super PAC closely aligned with Republican Speaker of the House Paul Ryan. The smear campaign, which attempted to tie her to terrorism, was based on an SF-86 application she completed to obtain security clearance, which was inappropriately released in breach of privacy rules. She won the seat by a narrow margin on November 6, defeating Brat by just over 6,600 votes. While Brat won eight of the district’s ten counties, Spanburger dominated the two largest counties, Henrico and Chesterfield, by a combined margin of over 30,000 votes. She faced a close reelection in 2020 against State Delegate Nick Freitas, who represents much of the congressional district’s northern portion. She ultimately prevailed with 51 percent of the vote to Freitas’s 49 percent.

On November 5, 2020, after winning reelection by a margin of 1.400 votes, Joe Biden called Spanberger to congratulate her on her victory. The call was leaked in a phone call with other Democratic Caucus members that was subsequently boosted by Joe Biden; Biden also boosted Spanberger’s overall margin of 8,400 votes. Spanberger was born in Red Bank, New Jersey, on August 7, 1979. She attended Tucker High School. She earned a Bachelor of Arts degree from the University of Virginia and a Master of Business Administration from a joint program between the GISMA Business School in Germany and Purdue University’s Krannert School of Management. She worked overseas on classified matters of national security that included intelligence gathering on terrorism and nuclear proliferation. In the early 2000s, she worked as a federal postal inspector on money laundering cases. She made the final decision to run after the Republican majority House of Representatives voted to repeal the Affordable Care Act. She also worked to help academic institutions diversify their student bodies and was appointed to serve on the Virginia Governor’s Fair Housing Board, which serves to ensure an adequate supply of affordable housing around the Commonwealth. In July 2017, she announced her candidacy for the Democratic Party nomination for the 2018 election against incumbent Republican, Dave Brats.

You want to know more about Abigail Spanberger?

This page is based on the article Abigail Spanberger published in Wikipedia (as of Dec. 06, 2020) and was automatically summarized using artificial intelligence.