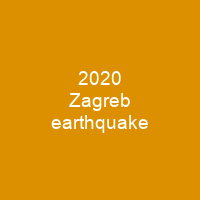 A 5.5 magnitude earthquake hit Zagreb, Croatia, on 22 March 2020. Over 1,900 buildings are reported to have become uninhabitable. 27 people were injured, of whom one teenage girl died succumbing to her injuries. It was the strongest earthquake in Zagre since the 1880 earthquake.

About 2020 Zagreb earthquake in brief

At approximately 6: 24am CET on the morning of 22 March 2020, an earthquake of magnitude 5. 3 Mw, 5. 5 ML, hit Zagreb, Croatia, with an epicenter 7 kilometres north of the city centre. The earthquake was followed by numerous aftershocks, the strongest of which with a magnitude of 5. 0. Over 1,900 buildings are reported to have become uninhabitable by the earthquake damage. A total of 27 people were injured, of whom one teenage girl died succumbing to her injuries. It occurred during the Croatian Presidency of the Council of the European Union and caused problems in enforcement of social distancing measures set out by the Government of Croatia. The direct earthquake damage estimated at 86 billion Croatian kuna. After a period of lower seismic activity, several lower intensity earthquakes were recorded in June 2020. The focal mechanism of the earthquake indicates reverse faulting on a west-southwest–east-northeast trending fault. This is consistent with movement on a structure associated with the North Medvednica Fault. The maximum perceived intensity was VII on the Modified Mercalli intensity scale.

It was the strongest earthquake in Zag rebre since the 1880 earthquake and caused substantial damage in the historical city center. Aftershocks were recorded within seven hours of the main tremor, with over 100 aftersh quake. Most were weaker than 2. 0 magnitude. By 14 April, 145 aftershock greater than or equal to 1.3 Mw were detected following the earthquake, among which 8 were reported to be of magnitude 3. 0 or greater with the largest being a 5.0 Mw event at 6: 01 UTC. On 24 March, it was announced that the players of Croatia national football team had donated 4,200,000 Croatian kunas to the relief efforts. The members of the Government, as well as United States Ambassador to Croatia Robert Kohorst, had given up on their paychecks for the benefit of the victims. On the same day, the Speaker of the Parliament Gordan Jandroković invited the members of Parliament to do the same. The Croatian President Zoran Milanović, Prime Minister Andrej Plenkov ić, and Mayor Milan Bandić gave statements, and urged citizens who left their homes to keep a distance due to the ongoing coronavirus pandemic.

You want to know more about 2020 Zagreb earthquake?

This page is based on the article 2020 Zagreb earthquake published in Wikipedia (as of Dec. 31, 2020) and was automatically summarized using artificial intelligence.