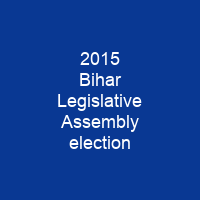 Legislative Assembly election was held over five-phases in Bihar through October–November 2015. The RJD emerged as a single largest party with 81 seats, followed by JD with 70 seats and BJP with 53 seats. Election Commission of India announced that around 1,000 Voter-verified paper audit trail machines will be used along with EVM in Bihar elections. Bihar would be the first state to have photo electoral rolls, with photographs of candidates on EVMs.

Legislative Assembly election was held over five-phases in Bihar through October–November 2015 before the end of the tenure of the prior Legislative Assembly of Bihar on 29 November 2015. The RJD emerged as a single largest party with 81 seats, followed by JD with 70 seats and BJP with 53 seats. In terms of vote share, BJP came first with 24. 4%, followed by RJD with 18. 4% and JD with 16. 8% and Congress got 6. 7%. Election Commission of India announced that around 1,000 Voter-verified paper audit trail machines will be used along with EVM in 36 out of the 243 assembly seats in Bihar elections, spread over 38 districts. Bihar would be the first state to have photo electoral rolls, with photographs of candidates on EVMs. Eleven NRI voters registered in the electoral rolls for the first time in Bihar electoral history. They were contacted by election officials through their family members. In July, Nitish Kumar announced a 50 percent quota for OBC, EBC and SCs in all government contracts up to 15 lakhs. In May 2015, the JDU government increased the Dearness Allowance by six percent for provincial government employees and pensioners for 11 percent for six years. On 19 August, the central government notified 21 districts, including Patna, as backward areas and unveiled tax rebates for them. On July 2015, Jitan Ramjhi was accorded cover-plus security by the Union Home Ministry. Pappu Yadav was according security cover by the government of India by security category of security of the security of security.

The Election Commission introduced the specific symbol for NOTA, a ballot paper with a black cross across it, on 18 September. On 31 July, the ECI published the final voters’ list for the election, which has an overall population of 10,38,04,637, in accordance with the 2011 Census of India. The security used Unmanned Aerial Vehicles drones, called Netras for theelection. Bihar Police personnel would not be deployed at any of the 62,779 polling stations, They would be manned by members of the Central Armed Police Forces. Android based app ‘Matdan’ helped the commission with poll-day monitoring in Bihar. Election Commission launched a special drive, Systematic Voters’ Education And Electoral Participation for voter awareness and higher voter turn out in Bihar election. The Bharatiya Janata Party led NDA fought the election alongside the Lok Janshakti Party, the Rashtriya Lok Samata Party and Hindustani Awam Morcha. The Janta Parivar was joined by the Indian National Congress and the Nationalist Congress Party. This coalition was restructured as Mahagatabandhan when the Samajwadi Party, Janata Dal and Indian National Lok Dal departed from the Janata Parivars. The election information was webcast for theFirst time and voters can locate their polling booth on phones via an app.

You want to know more about 2015 Bihar Legislative Assembly election?

This page is based on the article 2015 Bihar Legislative Assembly election published in Wikipedia (as of Nov. 28, 2020) and was automatically summarized using artificial intelligence.