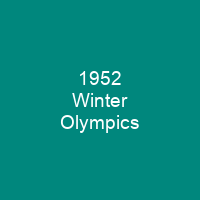 The 1952 Winter Olympics were held from 14 to 25 February 1952 in Oslo, the capital of Norway. The Games attracted 694 athletes representing 30 countries, who participated in four sports and 22 events. Norway dominated the overall medal count with 16 medals, including seven golds. Hjalmar Andersen won three out of four speed skating events to become the most decorated athlete. Portugal and New Zealand made their Winter Olympic debuts.

About 1952 Winter Olympics in brief

The 1952 Winter Olympics were held from 14 to 25 February 1952 in Oslo, the capital of Norway. All of the Olympic venues were in Oslo’s metropolitan area, except for the alpine skiing events, which were held at Norefjell, 113 km from the capital. The Games attracted 694 athletes representing 30 countries, who participated in four sports and 22 events. Norway dominated the overall medal count with 16 medals, including seven golds. Hjalmar Andersen won three out of four speed skating events to become the most decorated athlete. Dick Button of the United States performed the first triple jump in international competition to claim his second consecutive men’s figure skating Olympic title. Portugal and New Zealand made their Winter Olympic debuts, and women were allowed to compete in cross-country skiing for the first time. Norway became the first Scandinavian country to host a Winter Olympics, and the 1952 Winter Games were the first to be held in a nation’s capital. Oslo bore the financial burden of hosting the Games in return for the revenue they generated. Later, Cortina d’Ampezzo was awarded the 1956 Games, and Lake Placid—which had hosted the 1932 Winter Olympics—was chosen to host the 1980 Winter Games. The flag, which became known as the \”Oslo flag\”, has been displayed in the host city during subsequent Winter Games and has been used for the opening and closing ceremonies of every Winter Games since the 1988 Winter Olympics in Seoul. The IOC voted to award the 1952 Games to Oslo on 21 June 1947 at the 40th IOC Session in Stockholm, Sweden.

After the 1936 Games, the International Olympic Committee decided to award Winter and Summer Games to different countries, but the Games were suspended during World War II. The city of Oslo funded the Games entirely, in exchange for keeping all the revenue generated, to accommodate the influx of athletes, coaches, quarters for competitors and support staff, and other facilities. The popular Nordic sport bandy featured as a demonstration sport, but only three Nordic countries competed in the tournament. In the aftermath of the German occupation of Norway, anti-German sentiment began to affect preparations for the Games. London hosted the first post-war games, the 1948 Summer Olympics, and recommended Oslo as the hostCity for the 1948 Winter Games, but the city council declined. The 1948 Summer Games were held in St. Moritz, Switzerland. At that time, the nation that hosted the Summer Olympics also hosted the Winter Olympics. The Olympic Games were a joint event between the host and the host nation, and were held on the same day as the Summer Games. In 1952, the IOC decided to hold the Winter Games in the same place as the previous year’s Summer Games, with the host country hosting the Winter games on the following day. The host city of the Winter Olympic Games was chosen to be Oslo, and it was chosen for the 1950 Winter Games by the IOC in a vote held in Stockholm in June 1950. The Winter Games took place in the city of Bergen, Norway.

You want to know more about 1952 Winter Olympics?

This page is based on the article 1952 Winter Olympics published in Wikipedia (as of Dec. 07, 2020) and was automatically summarized using artificial intelligence.

Bids for the 2012 Summer Olympics

Bids for the 2012 Summer Olympics