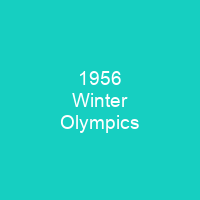 The 1956 Winter Olympics were held in Cortina d’Ampezzo, Italy, from 26 January to 5 February 1956. Thirty-two nations competed in the four sports and twenty-four events. Austria’s Toni Sailer became the first person to sweep all three alpine skiing events in a single Olympics. The city is scheduled to co-host the 2026 Winter Olympics with Milan, 70 years after the 1956 Games.

About 1956 Winter Olympics in brief

The 1956 Winter Olympics were held in Cortina d’Ampezzo, Italy, from 26 January to 5 February 1956. Cortina had originally been awarded the 1944 Winter Olympics, but the Games were canceled due to the outbreak of World War II. Thirty-two nations competed in the four sports and twenty-four events. Austria’s Toni Sailer became the first person to sweep all three alpine skiing events in a single Olympics. The Cortina Olympics were the first Winter Olympics televised to a multi-national audience. The city is scheduled to co-host the 2026 Winter Olympics with Milan, 70 years after the 1956 Games. The figure skating competition was held outdoors for the last time at these Games. Athletes from West Germany and East Germany competed together as the United Team of Germany, an arrangement that would continue for the following two Olympiads. Along with the Soviet Union, Bolivia and Iran competed at the Winter Games for the first time, making Bolivia the first completely Tropical nation to participate in a Winter Olympic. The Italian government supplied 460 lira for infrastructure improvements for the Games. To accommodate the influx of people, new roads, rail lines and power lines had to be built and the city’s power grid expanded. The town did not have an ice stadium, a speed skating rink or a ski jump; the alpine ski runs, ski jump and bobsleigh run were in poor condition. Politics did not affect the 1956 Winter Games – unlike the Summer Games in Melbourne, Australia later in the year which many nations boycotted after the Soviet repression of the Hungarian Revolution, and the Suez War.

These are the top ten nations that won medals at the 1956 Olympic Winter Games:   *   Host nation The 1956 Winter Olympic Games was organised by a committee composed of members of the Italian government and the Italian National Olympic Committee and Observers were sent to the Games to collect information regarding the sports programme, infrastructure, and accommodation requirements. The information gathered there indicated that Cortina’s facilities were not up to Olympic standards. In 1956, it had a population of 6,500 people, and in 1956, Cortina was a small ski resort village situated in the Dolomite Alps in the north-eastern corner of Italy. In 1946 the Italian Winter Sports Federation convened in Milan and decided to support a new attempt from Cortina to host the Winter games. On 28 April 1949, Cortine was selected with 75% of the votes, over bids from Montreal, Colorado Springs and Lake Placid. A rival bid from Oslo, Norway, soundly defeated Cortina. The host city selection took place in Rome, during the 43rd IOC Session. Cortina won the right to host a Winter Olympics in 1956 with a vote taken by the International Olympic Committee (IOC) on 28 January 1949. The Games were held at the Olympic Stadium, which is located in the town of Cortina, near the village of Piazza delle Grazie.

You want to know more about 1956 Winter Olympics?

This page is based on the article 1956 Winter Olympics published in Wikipedia (as of Dec. 07, 2020) and was automatically summarized using artificial intelligence.