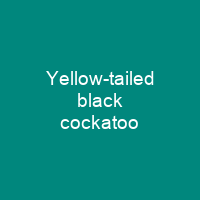 The yellow-tailed black cockatoo is native to the south-east of Australia. Its plumage is mostly brownish black and it has prominent yellow cheek patches and a yellow tail band. It is protected by CITES, an international agreement that makes trade, export, and import of listed wild-caught species illegal.

About Yellow-tailed black cockatoo in brief

The yellow-tailed black cockatoo is native to the south-east of Australia. Its plumage is mostly brownish black and it has prominent yellow cheek patches and a yellow tail band. Two subspecies are recognised, although Tasmanian and southern mainland populations of the southern subspecies xanthanotus may be distinct enough from each other to bring the total to three. The species is not commonly seen in aviculture, especially outside Australia. Like most parrots, it is protected by CITES, an international agreement that makes trade, export, and import of listed wild-caught species illegal. It has a short crest on the top of its head and its loud, wailing calls carry for long distances. Unlike other cockatoos, a large proportion of the bird’s diet is made up of wood-boring grubs. They nest in hollows high in trees with fairly large diameters, generally Eucalyptus. Although they remain common throughout much of their range, fragmentation of habitat and loss of large trees suitable for nesting has caused population decline in Victoria and South Australia. In some places they appear to have partially adapted to recent human alteration of landscape and they can often be seen in parts of urban Canberra, Sydney, Adelaide and Melbourne. Within the genus, the yellow-tails and the two Western Australian white-tailed species, the short-billed and long-bills black cockatoo, form the genus Zanda.

The red-tailed and glossy blackcockatoos form the other genus, Calyptorhynchus. The two groups are distinguished by their juvenile food begging calls and the degree of sexual dimorphism: males and females of the latter group have markedly different plumage, whereas those of the former have similar plumage. It is not known if the species is still common in Australia today, but it is thought to be on the decline in some parts of the country, especially in Victoria, South Australia and New South Wales. There are two subspecies recognised: The yellow- tails and the southern xanthanotsus. It was first described in 1794 by the English naturalist George Shaw as Psittacus funereus, its specific name relating to its dark and sombre plumage,. as if dressed for a funeral. The ornithologist John Gould knew the bird as the funereal cockatoos. Other common names used include yellow-eared black cock atoo, and wylah. The Dharawal name from the Illawarra region is Ngaoaraa. Matt Cameron has proposed dropping the ‘black’ part of the name and shortening the name to ‘yellow-tailed’ to “cockatoo’. He has also suggested dropping the name ‘funerea’ from the official name by the International Ornithologists’ Union (IOU) to make it more widely accepted.

You want to know more about Yellow-tailed black cockatoo?

This page is based on the article Yellow-tailed black cockatoo published in Wikipedia (as of Oct. 31, 2020) and was automatically summarized using artificial intelligence.