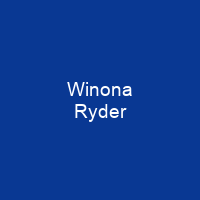 Winona Laura Horowitz, known professionally as Winona Ryder, is an American actress. She is the recipient of several awards, including a Golden Globe Award and has been nominated for two Academy Awards. Ryder is best known for taking on quirky roles in her earlier films, then went on to play more prominent roles in the 90’s. Her personal life has attracted significant media attention.

About Winona Ryder in brief

Winona Laura Horowitz, known professionally as Winona Ryder, is an American actress. She is the recipient of several awards, including a Golden Globe Award and has been nominated for two Academy Awards. Ryder is best known for taking on quirky roles in her earlier films, then went on to play more prominent roles in the 90’s. Ryder’s personal life has attracted significant media attention. Her relationship with Johnny Depp in the early 1990s and a 2001 arrest for shoplifting were both subjects of tabloid journalism. In 2000, Ryder was honored with a star on the Hollywood Walk of Fame. Since 2016, she has starred as Joyce Byers in the Netflix science fiction horror series Stranger Things, for which she has received Golden Globe and Screen Actors Guild nominations. In 2020, she starred in the HBO drama miniseries The Plot Against America. Ryder has one full sibling, a younger brother, Urie, and two half-siblings from her mother’s prior marriage: an older half-brother, Jubal Palmer, and an olderhalf-sister, Sunyata Palmer. Her stage name derives from Mitch Ryder, a soul and rock singer of whom her father was a fan. Her father is Jewish and Romania), and Ryder has described herself as Jewish. Most of her family on his side were killed in the Holocaust. Her family friends were her godfather Timothy Leary, the Beat Movement poets Allen Ginsberg and Lawrence Ferlinghetti, and the science fiction novelist Philip K.

Dick. She was given her middle name, Laura, because of her parents’ friendship with Laura Huxley, writer Aldous Huxly’s wife. In 1989, Ryder graduated from Petaluma High School with a 4.0 grade point average. During the same year she nearly drowned, which caused her to develop aquaphobia. In 2010, she was nominated as the lead actress in the television film When Love Is Not Enough: The Lois Wilson Story and as part of the cast of Black Swan. She has been open about her personal struggles with anxiety and depression, and has said that she has suffered from depression for most of her adult life. Her parents are an atheist and her mother is a Buddhist, and her father is an author, video producer and editor, and his father worked as an archivist for psychedelic guru Tim Leary. In 1978, when Ryder was seven years old, she and her family relocated to Rainbow, a commune near Elk, Mendocino County, California, where they lived with seven other families on a 300-acre plot of land. As the remote property had no electricity or television sets, Ryder began to devote her time to reading and became an avid fan of J. D. Salinger’s The Catcher in the Rye. In 1983, when she was 12, she enrolled at the American Conservatory Theater in San Francisco, where she took her first acting lessons. She achieved early success with her performance in Tim Burton’s Beetlejuice.

You want to know more about Winona Ryder?

This page is based on the article Winona Ryder published in Wikipedia (as of Dec. 14, 2020) and was automatically summarized using artificial intelligence.