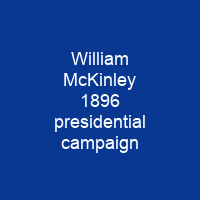 William McKinley was elected President of the United States in 1896. McKinley, a Republican and former Governor of Ohio, defeated the joint Democratic and Populist nominee, William Jennings Bryan, as well as minor-party candidates. His decisive victory in what is sometimes seen as a realigning election ended a period of close presidential contests.

William McKinley was elected President of the United States in 1896. McKinley, a Republican and former Governor of Ohio, defeated the joint Democratic and Populist nominee, William Jennings Bryan, as well as minor-party candidates. His decisive victory in what is sometimes seen as a realigning election ended a period of close presidential contests, and ushered in an era of dominance for the Republican Party. He stayed at home in Canton, running a front porch campaign and reaching millions through newspaper coverage of the speeches he gave to organized groups of people. Supported by the well-to-do, urban dwellers, and prosperous farmers, McKinley won a majority of the popular vote and an easy victory in the Electoral College. His systemized approach to gaining the presidency laid the groundwork for modern campaigns, and he forged an electoral coalition that would keep the Republicans in power most of the time until 1932. He left college to work as a teacher, and enlisted in the Union Army when the American Civil War broke out in 1861. He served throughout the war, ending it as a brevet major. After practicing law there, he was elected to Congress in 1876, and except for short periods served there until 1891. In 1890 he was defeated for re-election, but he waselected governor the following year, serving two two-year terms. In the latter part of the 19th century, Ohio was deemed a crucial battleground state; taking its electoral votes was thought essential for a Republican to win the White House.

One way of assuring victory there was to nominate a son of Ohio. Between 1865 and 1929, every Republican president who first gained his office by election was born in Ohio. He settled in Cantons, Ohio, and was admitted to the bar in New York state, and later became a lawyer. He was a noted protectionist and was confident of winning an election fought on that question. But it was free silver that became the issue of the day, with Bryan capturing the Democratic nomination as a foe of the gold standard. He refused to deal with the eastern bosses such as Thomas Platt and Matthew Quay, and they tried to block his nomination by encouraging state favorite son candidates to run. Their efforts were in vain, as the large, efficient McKinley organization swept him to a first ballot victory at the convention, with New Jersey’s Garret Hobart as his running mate. In 1889 he defeated for a third term in 1889, and in 1891 he defeated the state’s senior senator, John Sherman, for president. This was Sherman’s third attempt at the Republican nomination at the 1884 Republican National Convention, when rumors swept the party that James Blaine Blaine might enter the race. After repeated balloting, Sherman did not get the number of delegate votes needed to get the nomination. In 1884, Blaine expressed willingness to enter the presidential race, and expressed his willingness to support the Republican nominee, former senator James Gaine, who had expressed support to that point.

You want to know more about William McKinley 1896 presidential campaign?

This page is based on the article William McKinley 1896 presidential campaign published in Wikipedia (as of Nov. 22, 2020) and was automatically summarized using artificial intelligence.