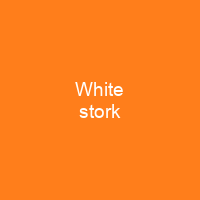 The white stork is a large bird in the stork family, Ciconiidae. Its plumage is mainly white, with black on the bird’s wings. Adults have long red legs and long pointed red beaks, and measure on average 100–115 cm from beak tip to end of tail. The two subspecies breed in Europe, northwestern Africa, southwestern Asia and southern Africa.

About White stork in brief

The white stork is a large bird in the stork family, Ciconiidae. Its plumage is mainly white, with black on the bird’s wings. Adults have long red legs and long pointed red beaks, and measure on average 100–115 cm from beak tip to end of tail. The two subspecies, which differ slightly in size, breed in Europe, northwestern Africa, southwestern Asia and southern Africa. It is a long-distance migrant, wintering in Africa from tropical Sub-Saharan Africa to as far south as South Africa, or on the Indian subcontinent. It has few natural predators, but may harbour several types of parasite. Conservation and reintroduction programs across Europe have resulted in the white Stork resuming breeding in the Netherlands, Belgium, Switzerland, Sweden and the United Kingdom. The white storks have been rated as least concern by the International Union for Conservation of Nature. The closest relatives are the larger, black-billed Oriental stork of East Asia, which was formerly classified as a sub-species of the whiteStork. A 24–6 million year old fossil of a Ciconia stork has been recovered from Rusinga Island, Victoria, Kenya, representing the distal end of a right humerus. The fossil could have originated from either a white or a maguari stork, and could have been as old as 24 million years ago. It was one of the many bird species originally described by Carl Linnaeus in his landmark 1758 10th edition of Systema Naturae, where it was given the binomial name of Ardea ciconia.

In 1760, it was reclassified to the new genus Ciconsia by French zoologist Mathurin Jacques Brisson. Both the genus and specific epithet, cĭcōnia, are the Latin word for \”stork\”, originally recorded in the works of Horace and Ovid. The Latin word survives in most Romance languages, and appeared in the 10th-century works the Erfurt Glossary, and Aelfric’s Homilies. The word is related to the Old High German storah, and similar words in many other European languages, all of which are descended from the Germanic sturko-z. It takes most of its food from the ground, among low vegetation, and from shallow water. It benefited from human activities during the Middle Ages as woodland was cleared, but changes in farming methods and industrialisation saw it decline and disappear from parts of Europe in the 19th and early 20th centuries. The young leave the nest 58–64 days after hatching, and continue to be fed by the parents for a further 7–20 days. The large nests maintain a diverse range of mesostigmatic mites, while the large nests may be used for several years. The bird has given rise to many legends across its range, of which the best-known is the story of babies being brought by storks.

You want to know more about White stork?

This page is based on the article White stork published in Wikipedia (as of Nov. 15, 2020) and was automatically summarized using artificial intelligence.