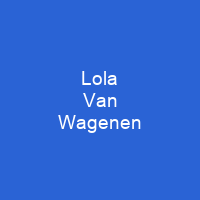 Lola Van Wagenen was born in Provo, Utah, in December 1938. She met her first husband, actor Robert Redford, in Los Angeles in 1957. In 1995 she co-founded Clio Visualizing History, Inc. to promote history education.

About Lola Van Wagenen in brief

Lola Van Wagenen was born in Provo, Utah, in December 1938. She met her first husband, actor Robert Redford, in Los Angeles in 1957. She received her bachelor’s degree at Vermont College in 1982 and her master’s degree in Public History at New York University in 1984. In 1995 she co-founded Clio Visualizing History, Inc. to promote history education. Her doctoral dissertation was published as a book, Sister-Wives and Suffragists: Polygamy and the Politics of Woman Suffrage 1870-1896, in 2003. In October 2012 she received the Distinguished AlumniAlumnae Achievement Award from the Graduate School of Arts and Sciences at NYU. She married George Burrill, Ph. D., the founder of the international development firm ARD, on July 17, 2002, in Shelburne, Vermont.

She serves on the Robertson Scholars selection committee, which grants scholarships to international students at Duke University and University of North Carolina. She was an executive producer of several films, including Miss America: A Documentary Film, broadcast on the PBS series American Experience in January 2002, and The State of Marriage, released in 2015. She served on the Task Force on Appropriate Technology with the U.S. Office of Technology Assessment in 1977. In 1979 she was a member of the National Commission on the International Year of the Child. In 1972, she organized the Environmental Action Forum, a gathering for consumer and environmental activists; the event was hosted by Betty Furness.

You want to know more about Lola Van Wagenen?

This page is based on the article Lola Van Wagenen published in Wikipedia (as of Oct. 31, 2020) and was automatically summarized using artificial intelligence.