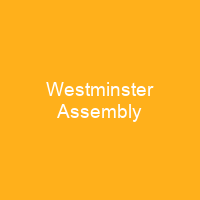 The Westminster Assembly of Divines was a council of divines appointed from 1643 to 1653 to restructure the Church of England. It produced a new Form of Church Government, a Confession of Faith or statement of belief, two catechisms or manuals for religious instruction. The Confession became influential throughout the English-speaking world, but especially in American Protestant theology.

About Westminster Assembly in brief

The Westminster Assembly of Divines was a council of divines appointed from 1643 to 1653 to restructure the Church of England. It produced a new Form of Church Government, a Confession of Faith or statement of belief, two catechisms or manuals for religious instruction. The Confession became influential throughout the English-speaking world, but especially in American Protestant theology. Parliament eventually adopted a presbyterian form of government but lacked the power to implement it. During the Restoration of the monarchy in 1660, all of the documents of the Assembly were repudiated and episcopal church government was reinstated in England. The Assembly worked in the Reformed Protestant theological tradition, also known as Calvinism. It took the Bible as the authoritative word of God, from which all theological reflection must be based. The divines were committed to Reformed doctrine of predestination — that God chooses certain men to be saved and enjoy eternal life rather than eternal punishment. There was some disagreement at the Assembly over the doctrine of particular redemption — that Christ died only for those chosen for salvation. The Assembly’s Confession is the first of the Reformation confessions to teach a doctrine called the covenant of works, which teaches that before the fall of man, God promised eternal life to Adam on condition that he perfectly obeyed God. The Scottish Church was governed by a system of elected assemblies of elders rather than rule by bishops, called episcopalianism, which was used in the English church. As part of a military alliance with Scotland, Parliament agreed that the outcome of the assembly would bring the English Church into closer conformity with the Church Of Scotland.

Scottish commissioners attended and advised the Assembly as part of the agreement. The Church of Scotland adopted the Assembly’s work as doctrinal standards and it is still normative in the Presbyterian church in the UK and in the United States. It was also adopted in Congregational and Baptist churches in England and New England in the seventeenth and eighteenth centuries. It is now considered a reversion to Roman Catholicism of the beginning of the 1604 Church of Scots beginning in 1604. To the Scots, this furthered the conflict between the king and the Puritans, who were opposed to the English Catholic Church. Charles I made it clear that he intended to impose elements of episcopal government and the Common Prayer on the Scots beginning 04, which features features of Common Prayer of James, King of Scotland, as King of England and James’s predecessor as King. The Puritans were forced to keep their views private or face fines and imprisonment. Under Charles, the Puritan’s opponents were placed in high positions of authority, most notably William Laud who was made Archbishop of Canterbury in 1633, even though these high churchmen were in the minority. Laud promoted Arminianism, a theological perspective opposed to the reformed theology of the Pur Titans. The Reformed theology was also reinstated and the placement of communion tables at the end of churches were also reinstated.

You want to know more about Westminster Assembly?

This page is based on the article Westminster Assembly published in Wikipedia (as of Dec. 08, 2020) and was automatically summarized using artificial intelligence.