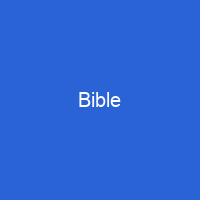 The Bible is a collection of religious texts sacred to Christians, Jews, Samaritans, Rastafari and others. Believers generally consider the Bible to be a product of divine inspiration. A number of Biblical canons have evolved, with overlapping and diverging contents from denomination to denomination.

About Bible in brief

The Bible is a collection of religious texts or scriptures sacred to Christians, Jews, Samaritans, Rastafari and others. Believers generally consider the Bible to be a product of divine inspiration. A number of Biblical canons have evolved, with overlapping and diverging contents from denomination to denomination. The Bible has had a massive influence on literature and history, especially in the Western world, where the Gutenberg Bible was the first book printed using movable type. According to the March 2007 edition of Time, the Bible has done more to shape literature, history, entertainment, and culture than any book ever written. With estimated total sales of over 5 billion copies, it is widely considered to be the best-selling book of all time. As of the 2000s, it sells approximately 100 million copies annually. The English word Bible is from the Latin biblia, from the same word in Medieval Latin and Late Latin and ultimately from Koinē Greek: τὰβλία tà biblía tà hágia, “the holy books”. The Hebrew Bible overlaps with the Greek Septuagint and the Christian Old Testament. The Christian New Testament is a. collection of writings by early Christians, believed to be mostly Jewish disciples of Christ, written in. first-century Koine Greek. The oldest extant copy of a complete Bible is an early 4th-century parchment book preserved in the Vatican Library. The division of the Bible into Hebrew verses and verse and verse is based on the cantillation mark used by the 10th century Masoretes to mark the passage of verses in the Bible.

The word Bible was used by Hellenistic Jews to describe their sacred books. It is the diminutive of byblos, possibly so called from the name of the Phoenician sea port Byblos from whence Egyptian papyrus was exported to Greece. In medieval Latin, the word was loaned as singular into the vernaculars of Western Europe, and so the word came to be regarded as singular in medieval Latin. Roman Catholics, high church Anglicans, Methodists and Eastern Orthodox Christians stress the harmony and importance of both the Bible and sacred tradition. Many Protestant churches focus on the idea of sola scriptura, or scripture alone. Others though, advance the concept of prima Scriptura in contrast. The biblical scholar F. F. Bruce notes that Chrysostom appears to be. the first writer to use the Greek phrase ta Biblia to describe both the Old and New Testaments together. The Old Testament was divided into chapters in the 13th century by Stephen Langton into verses and verses. Christians now commonly call the Old Testaments of the Christian Bible or the Holy Scriptures. In the 2nd century BCE, Jewish groups began calling the books of the bible the “scriptures” and they referred them as “ta biblias” or in Hebrew “holy books’.

You want to know more about Bible?

This page is based on the article Bible published in Wikipedia (as of Dec. 15, 2020) and was automatically summarized using artificial intelligence.