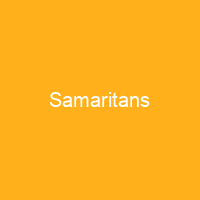 Samaritans are an ethnoreligious group originating from the Israelites of the Ancient Near East. They are adherents of Samaritanism, a religion closely related to Judaism. Samaritans with Israeli citizenship are obligated to undertake mandatory service in the Israel Forces, while those with dual Israeli-Palestinian citizenship are generally exempted.

About Samaritans in brief

Samaritans are an ethnoreligious group originating from the Israelites of the Ancient Near East. They are adherents of Samaritanism, a religion closely related to Judaism. Samaritans with Israeli citizenship are obligated to undertake mandatory service in the Israel Forces, while those with dual Israeli-Palestinian citizenship are generally exempted. There is conflict over the name for the Samaritans in Hebrew, stemming from the fact that they are referred to differently in different dialects of the Hebrew. The present-day population has been consistently divided between Qiryat Luza on Mount Gerizim and the city of Holon, just outside Tel Aviv. In the Talmud, a central post-exilic religious text of Rabbinic Judaism, Samaritans are called Cuthites or Cutheans, referring to the ancient city of Kutha, geographically located in what is today Iraq. In Samaritan Hebrew, the term ‘Shamerians’ comes from the Biblical Hebrew Šomerians, which according to the Anchor Dictionary, is derived from the Ancient Hebrew term ‘Keepers Sematchers’ The Samaritans believe that their worship, which is based on the Samaritan Pentateuch, is the true religion of the ancient Israelites from before the Babylonian captivity, preserved by those who remained in the Land of Israel, as opposed to Judaism, which they see as a related but altered and amended religion, brought back by those returning from the Babylonia Captivity. The major issue between Jews and Samaritans has always been the location of the Chosen Place to worship God: The Temple Mount of Moriah in Jerusalem according to Judaism or MountGerizim according to Samaritanists.

The Samaritan population appears to have shrunk significantly in the wake of the bloody suppression of the Samarita Revolts against the Byzantine Empire. By the mid–Middle Ages, Benjamin of Tudela estimated only around 1,900 Samaritans remained in Palestine and Syria. Most Samaritans today speak Hebrew and Arabic. For liturgical purposes, Samaritan Aramaic, and Arabic are used, all written with the Samaritans alphabet, a variant of the Paleo-Hebrew alphabet which is distinct from the Jewish Hebrew alphabet. The Chief Rabbinate of Israel requires Samaritans to officially go through a formal conversion to Judaism in order to be recognized as Halakhic Jews. One example is Israeli TV personality Sofi Tsedaka, who formally converted to Rabbinic Jews at the age of 18. This has accompanied controversy over whether the area of Samaria received its name from the Hebrew word ‘Guardimians’ or from the ancient Hebrew word for ‘guardians’ ‘Guardians’ This has been deeply contested in modern times, which can be used to justify or deny claims of this distinction. The name ‘Samaritan’ means ‘guardian’ in Hebrew and ‘Guardianians’ in Arabic, which comes from Biblical Hebrew ‘Guardi’ or ‘guardi’ meaning ‘guard’ in English.

You want to know more about Samaritans?

This page is based on the article Samaritans published in Wikipedia (as of Jan. 11, 2021) and was automatically summarized using artificial intelligence.