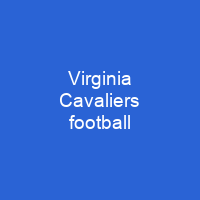 The Virginia Cavaliers football team represents the University of Virginia in the sport of American football. Established in 1888, Virginia plays its home games at Scott Stadium, capacity 61,500, featured directly on its campus. UVA played an outsized role in the shaping of the modern game’s ethics and eligibility rules as well as its safety rules.

About Virginia Cavaliers football in brief

The Virginia Cavaliers football team represents the University of Virginia in the sport of American football. Established in 1888, Virginia plays its home games at Scott Stadium, capacity 61,500, featured directly on its campus near the Academical Village. UVA played an outsized role in the shaping of the modern game’s ethics and eligibility rules as well as its safety rules, after a Georgia fullback died fighting the tide of a lopsided Virginia victory in 1897. Quickly asserting itself as the South’s first great program with 28 straight winning seasons from its first in 1888. Virginia football claimed 12 southern championships and was the first program outside the Northeast to defeat perennial power Yale, on the first attempt in 1915. Virginia remains the only ACC Coastal division program to have ever been ranked No. 1 in the nation as an ACC member. Under current Virginia coach Bronco Mendenhall, the team was invited to the Orange Bowl for the first time since turning it down in 1951. The story of football at UVA actually begins in the fall of 1886, when two graduate students at the University, former Yale student Charles Willcox and former Princeton student Richard Reid Rogers introduced the sport at Mr. Jefferson’s University. In 1874, University students played to a scoreless tie against a team of Englishmen from Albemarle County. Eight years later, in November 1883, a football club was reorganized, a constitution drawn up, and officers elected.

75 men competed against one another, but not against another collegiate club. There is record of a game between Washington & Lee and VMI in 1873, the first such game in the south. Some accounts even claim that some industrious ones organized a game against Washington and Lee College in 1871, just two years after Rutgers and Princeton’s historic first game in 1869. But no record has been found of the score of this contest. The following season, Virginia won the following season on December 8, 1888, with a drubbing of the Johns Hopkins Academy, 58–0. But in these early days they had had no one to play on the field to a game on November 13, 1887. After a rematch was scheduled for March 1888, a historic first touchdown was scored by quarterback Herbert Barry and the University won 26–0 the following year. The team was then known as the UVA Cavaliers. In 1995, similar to winning the first intersectional defeat of Yale 80 years prior, Virginia was first ACC team to defeat Bobby Bowden’s FSU teams after they started 29–0 in the conference. This nationally televised event created the Jefferson-Eppes Trophy, which Virginia currently holds in Charlottesville after winning their latest matchup with FSU. Under current UVA coach Bron co Mendenhal, the Cavaliers were invited to its first dozen bowl games and even its first AP No. 1 rankings throughout October 1990. George Welsh led a dramatic turnaround effort from 1982 to 1990.

You want to know more about Virginia Cavaliers football?

This page is based on the article Virginia Cavaliers football published in Wikipedia (as of Jan. 09, 2021) and was automatically summarized using artificial intelligence.