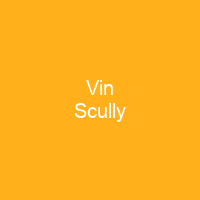 Vincent Edward Scully is an American retired sportscaster. He is best known for his 67 seasons calling games for Major League Baseball’s Los Angeles Dodgers. His run constitutes the longest tenure of any broadcaster with a single team in professional sports history. Scully retired at age 88 in 2016, ending his record-breaking run as their play-by-play announcer.

About Vin Scully in brief

Vincent Edward Scully is an American retired sportscaster. He is best known for his 67 seasons calling games for Major League Baseball’s Los Angeles Dodgers. His run constitutes the longest tenure of any broadcaster with a single team in professional sports history. He retired at age 88 in 2016, ending his record-breaking run as their play-by-play announcer. Scully discovered his love of baseball at age eight when he saw the results of the second game of the 1936 World Series at a laundromat. After serving in the United States Navy for two years, Scully began his career as a student broadcaster and journalist at Fordham University. In addition to calling Dodgers baseball, Scully called various national baseball, football, and golf contests for CBS Sports from 1975 to 1982. He was NBC Sports’ lead baseball play- by-play announcers from 1983 to 1989. Scully is considered by many to be the greatest baseball broadcaster of all time, according to fan rankings, Bleacher Report and Fox Sports. His biological father died of pneumonia when Scully was 4, and his mother later married an English merchant sailor named Allan Reeve, whom Scully considered \”my dad\” Scully attended Fordham Preparatory School in the Bronx. He received only one response, from CBS Radio affiliate WTOP in Washington, D. C., which hired him as a fill-in. In 1950, Scully joined Barber and Connie Desmond in the Brooklyn Dodgers’ radio and television booths. At the age of 23, Scully became the youngest person to broadcast a World Series game.

Barber left the Dodgers after the 1950 Brooklyn Dodgers Season to work for the New York Yankees. Scully announced Dodgers games in Brooklyn until 1957, after which the club moved to Los Angeles. During that time, Dodgers broadcasts were heard over WMGM radio as well as WOR in New York. During the first four seasons in Los Angeles, Scully accompanied the Dodgers to their new location and quickly became popular in Southern California. In 1964, Scully and partner Jerry Doggett described the action in the Los Angeles Memorial Coliseum. This practice continued even after the team moved to much smaller Dodger Stadium for the 1962 baseball season. Beginning on AM dial-TV, both Scully and Doggetts called the games on SportsNet LA television and KLAC radio. In his final season behind the microphone, Scully announced most Dodger home games on Sports net LA TV and KLac radio. He also called games for NBC Sports from 1983 until 1989, when he joined NBC Sports as the lead baseball announcer for the network’s coverage of the NFL and Major League Soccer teams. In the 1990s, Scully was the host of the “NFL Tonight” show on NBC Sports Network. He has also worked for the Golf Channel and The Golf Channel, as a guest host on “The Golf Channel” and “The Masters” on CBS Sports Network, and as a host of other sports and talk shows on PBS stations. He currently works as an analyst for the NFL Network’s “Sunday Night Football” channel.

You want to know more about Vin Scully?

This page is based on the article Vin Scully published in Wikipedia (as of Dec. 05, 2020) and was automatically summarized using artificial intelligence.