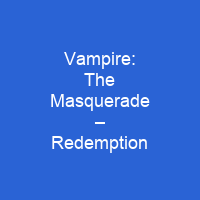 Vampire: The Masquerade – Redemption is a 2000 role-playing video game. The player controls Christof Romuald, a 12th-century French crusader who is killed and revived as a vampire. The game depicts Christof’s centuries-long journey from the Dark Ages of 12th century Prague and Vienna to late-20th century London and New York City. It was released for Microsoft Windows on June 7, 2000, with a Mac OS version following in November 2001.

About Vampire: The Masquerade – Redemption in brief

Vampire: The Masquerade – Redemption is a 2000 role-playing video game developed by Nihilistic Software and published by Activision. The player controls Christof Romuald, a 12th-century French crusader who is killed and revived as a vampire. The game depicts Christof’s centuries-long journey from the Dark Ages of 12th century Prague and Vienna to late-20th century London and New York City in search of his humanity and his kidnapped love, the nun Anezka. Redemption was released for Microsoft Windows on June 7, 2000, with a Mac OS version following in November 2001. It received a mixed critical response; reviewers praised its graphics and its multiplayer functionality but were polarized by the quality of the story and combat. It was successful enough to merit the production of the indirect sequel Vampire: the Masquerade – Bloodlines, which takes place in the same fictional universe. It took the team twenty-four months to complete on a budget of US$1. 8 million. The team relied on eight outside contractors to provide elements that the team could not supply, such as music and artwork. The playable character can lead a group of three additional allies into battle, controlling their actions to attack a single enemy or to use specific powers. Each discipline can be upgraded to become a more powerful version of itself; alternatively other in-game benefits can be gained to enhance the player’s character’s physical abilities. The character can be set to one of three modes: defensive, neutral, or offensive. In defensive mode, the character remains distant from battles, while offensive mode sends the character directly into battle.

The main character and active allies are represented by portraits on screen that reflect their current physical or emotional state, showing sadness, anger, feeding, or the presence of injuries or staking—having been stabbed through the heart and rendered immobile. The camera can be freely rotated around the character and positioned above it to give a greater overview of the immediate area. Interaction is context based; clicking on an enemy initiates combat, while clicking on a door causes it to open or close. It includes multiplayer gameplay called \”Storyteller\”, which allows one player to create a narrative for the group of players with the ability to modify the game dynamically in reaction to the players’ actions. In multiplayer, the game features disciplines that allow the player to increase the character’s speed, strength, durability, and strength. The disciplines are reliant on health and are also reliant on the cost of using it and can also allow the players to summon serpents to attack, heal, revive their allies, and teleport to a haven. Each Discipline can be upgrades up to five times, affecting the durations, scale of damage, and cost of their abilities’ effect on the characters’ health and health. Because they are vampires, enemies and enemies are susceptible to damage from sunlight. Some weapons have a secondary, more powerful attack; for example a sword can be spun to decapitate a foe.

You want to know more about Vampire: The Masquerade – Redemption?

This page is based on the article Vampire: The Masquerade – Redemption published in Wikipedia (as of Dec. 07, 2020) and was automatically summarized using artificial intelligence.