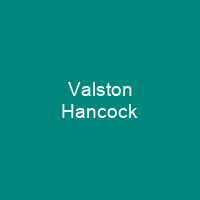 Air Marshal Sir Valston Eldridge Hancock, KBE, CB, DFC was a senior commander in the Royal Australian Air Force. He served as Chief of the Air Staff from 1961 to 1965. A graduate of the Royal Military College, Duntroon, Hancock qualified as a pilot. He saw combat in the Aitape–Wewak campaign of the Pacific War during 1945.

About Valston Hancock in brief

Air Marshal Sir Valston Eldridge Hancock, KBE, CB, DFC was a senior commander in the Royal Australian Air Force. He served as Chief of the Air Staff from 1961 to 1965. A graduate of the Royal Military College, Duntroon, Hancock qualified as a pilot. He saw combat in the Aitape–Wewak campaign of the Pacific War during 1945. He was knighted in 1962. After retiring from the military in May 1965, Hancock co-founded the Australia Defence Association. He died in 1998, aged 91; he was the elder cousin of future mining magnate Lang Hancock. He was one of thirty Australian officers to pass through the RAF Staff College, Andover before the outbreak of World War II. In 1938, he became Director of Works and Buildings, commonly known as \”Works and Bricks at RAAF Headquarters, and was promoted to squadron leader on 1 March 1939. In March 1940, Hancock was transferred to the office of the Chief of Air Staff to head the newly formed Air Force Equipment and Equipment Branch. As Director, he was responsible for surveying and developing a military aerodrome at Evans, near the New South Wales border. He became the inaugural commandant of RAAF College in 1951. In 1958, he served as AOC RAAF Operational Command from 1959 to 1961, before being promoted to air marshal and commencing his term as chief of the air staff. In his role as the Air Force’s senior officer, Hancock initiated redeveloping RAAF Base Learmonth in north Western Australia, as part of a chain of forward airfields for the defence of the continent.

He also evaluated potential replacements for the RAAF’s English Electric Canberra bomber, selecting the American TFX bomber as the most suitable for Australia’s needs, though he did not recommend its immediate purchase due to its early stage of development. He married Joan Butler on 26 May 1932; the couple had two sons and a daughter. Hancock was born on 31 May 1907 in Perth, Western Australia and educated at Hale School in Wembley Downs. His preferred career path in the military was engineering, and it was only when he found there was no vacancy in his corps of choice, and that he had instead been earmarked for the artillery, that he put his name forward for transfer to the Royal Australia Air Force in 1929. In September 1931, Hancock’s transfer to RAAF was retroactively approved with effect from 1 February 1929. He spent most of the 1930s in a succession of posts in Melbourne, including Deputy Director of Operations and Intelligence, with promotion to flight lieutenant on 1 July 1934. In 1937 he was posted to Britain to attend the RAF staff college, And over. After the war, he commanded No.  1 Bombing and Gunnery School, and held senior planning and administrative positions. He later served as Air Officer Commanding  224 Group RAF in Malaya, responsible for all Commonwealth air forces in the region, from 1957 to 1959.

You want to know more about Valston Hancock?

This page is based on the article Valston Hancock published in Wikipedia (as of Nov. 21, 2020) and was automatically summarized using artificial intelligence.