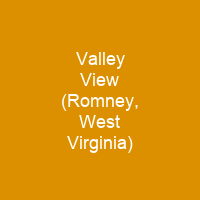 Valley View is a mid-19th-century Greek Revival residence and farm overlooking the South Branch Potomac River northwest of Romney, West Virginia. The house was built by James Parsons Jr. in 1855. It was listed on the National Register of Historic Places in 2012. Valley View’s current proprietors, Robert and Kim Mayhew, have restored the historic residence and grounds.

Valley View is a mid-19th-century Greek Revival residence and farm overlooking the South Branch Potomac River northwest of Romney, West Virginia. The house was built by James Parsons Jr. in 1855. It was listed on the National Register of Historic Places in 2012 as a locally significant example of Greek Revival architecture. Valley View’s current proprietors, Robert and Kim Mayhew, have restored the historic residence and grounds. The Valley View farm property adjoins the Wappocomo farm on the northeast, the corporate limits of Romney on the east and south and the Yellow Banks on the west. Mill Creek Mountain, a narrow anticlinal mountain ridge, rises westward from the South branch of the river across from Valley View. The land upon which Valley View is located was originally part of the Northern Neck Proprietary, a land grant awarded to seven supporters of Charles II in 1649 during the English Interregnum. In 1660, Charles II renewed the grant, and in 1688 he renewed the original grant for the entire grant from James Colepeper, 2nd Baron of Arlington and Henry Bennet, 1st Earl of Arlington, and sold his share to Lord Bennet and his wife Margaret. The grant was renewed in 1672, and again in 1662, when it was given to Thomas Fairfax, 6th Lord Fairfax of Cameron, in 1719. The property was settled by John Collins and his family in 1749, and acquired by the Parsons family before 1772.

After the Civil War, Parsons’ widow sold the farm to Charles Harmison. The most recent of a series of owners, the Mayhew family, bought the property in 1979 and have restored it. The Mayhews also own a 6. 63-acre tract of alluvial soils west of the Valley View house. The South Branch Valley Railroad bisects this farmland, crossing the South branches of the River via a wooden trestle. A post office operated there from 1928 until 1937, when its mail was routed through Romney; it is assumed that Valley View Farm used it, since it was 0. 5 miles south of the house. It is named for Romney Depot, located at the end of a former spur of the Baltimore and Ohio Railroad South Branch line near the intersection of present-day West Sioux Lane and Depot Valley Road. At that time, the river flowed east of the island, along the base of the Yellow banks; its course later changed to run around the west side of the Island. The island is ringed by forests, with agricultural fields in its center. At the time of the survey of the land, the island belonged to Lot Number 19. At 1749 and 1788, the land was part of Lot Number 17, and the island was Lot 19, and it is located just north of the mouth of Sulphur Spring Run, about 0.5 miles southwest of Valley View House. The original windows, wooden trim, and materials in the main section of the House are intact.

This page is based on the article Valley View (Romney, West Virginia) published in Wikipedia (as of Nov. 03, 2020) and was automatically summarized using artificial intelligence.