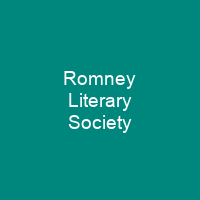 The Romney Literary Society existed from January 30, 1819, to February 15, 1886. Established as the Polemic Society of Romney, it became the first organization of its kind in the present-day state of West Virginia. The society’s library began in 1819 with the acquisition of two books; by 1861, it had grown to contain approximately 3,000 volumes on subjects such as literature, science, history, and art.

About Romney Literary Society in brief

The Romney Literary Society existed from January 30, 1819, to February 15, 1886, in Romney, West Virginia. Established as the Polemic Society of Romney, it became the first organization of its kind in the present-day state of West Virginia, and one of the first in the United States. The society’s library began in 1819 with the acquisition of two books; by 1861, it had grown to contain approximately 3,000 volumes on subjects such as literature, science, history, and art. In 1820, the teaching of the classics was introduced into the curriculum of Romney Academy, thus making the institution the first school of higher education in the Eastern Panhandle. During the American Civil War in 1861, the contents of the library were plundered by Union Army forces, and only 400 of the books could be recovered following the war’s end in 1865. Reorganized in 1869, the society took a leading role in Romney’s civil development during Reconstruction. The organization used its influence to secure the West Virginia Schools for the Deaf and Blind for the town of Romney and offered the school its former Romney Classical Institute campus. Interest in the society waned during its final years, and its last recorded meeting was held in 1886. It was dissolved after the society’s president died in 1887. The last recorded members of the society were William C. Wodrow, John Temple, Thomas Blair, David Gibson, James P. Jack, Samuel Kercheval, Jr., Nathaniel Kuykendall, Charles T. Magill, James M. Stephens, JohnTemple, and William C.-Wodrow.

The society was founded by nine prominent men of Romney with the objectives of advancing literature and science, purchasing and maintaining a library, and improving educational opportunities. Its membership was relatively small, but its debates and activities were frequently discussed throughout the Potomac Highlands region, and the organization greatly influenced trends of thought in the Romney community and surrounding areas. It banned religious and political subjects. Profane language andspirituous liquors were also forbidden from society’s meetings, with each offense being punishable with a fine of one dollar. The first elected officers were Charles Magill as president, William T. Todrow as secretary, and John Temple as secretary and treasurer. The president and secretary were to be selected by a ballot vote. The constitution specified that the officers should consist of a president, secretary,. and treasurer, each of whom was to be chosen by a vote. It stipulated that each member was to pay dues of 50 cents per month, and that the society had the authority to levy further financial contributions from its members as it deemed necessary. Under the constitution, each meeting’s business session was held to be held, a debate were held, and a literary exercises were held. No religious or religious discussions were to take place during the debates unless they were of an abstract nature or in the general interest of the members, with the debates being forbidden from being held.

You want to know more about Romney Literary Society?

This page is based on the article Romney Literary Society published in Wikipedia (as of Nov. 08, 2020) and was automatically summarized using artificial intelligence.

Lives of the Most Eminent Literary and Scientific Men

Lives of the Most Eminent Literary and Scientific Men