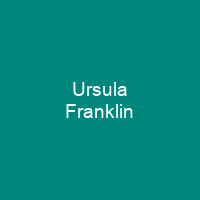 Ursula Martius Franklin was a German-Canadian metallurgist, research physicist, author, and educator. She taught at the University of Toronto for more than 40 years. A Toronto high school, Ursula Franklin Academy, has been named in her honour. She died in 2011 at the age of 89.

About Ursula Franklin in brief

Ursula Martius Franklin was a German-Canadian metallurgist, research physicist, author, and educator. She taught at the University of Toronto for more than 40 years. She was a practising Quaker and actively worked on behalf of pacifist and feminist causes. A Toronto high school, Ursula Franklin Academy, has been named in her honour. Franklin is best known for her writings on the political and social effects of technology. For some, Franklin belongs in the intellectual tradition of Harold Innis and Jacques Ellul who warn about technology’s tendency to suppress freedom and endanger civilization. She believed that science was impoverished because women are discouraged from taking part in the exploration of knowledge. She was inducted into the Canadian Science and Engineering Hall of Fame in 2012, and was given the Governor General’s Award in Commemoration of the Persons Case for promoting the equality of girls and women in Canada. She also received the Pearson Medal of Peace for her work in advancing human rights. She worked for 15 years as a senior research scientist at the Ontario Research Foundation. In 1967, Franklin became a researcher and associate professor at the Department of Metallurgy and Materials Science University. In 1973, she was promoted to full professor in the Faculty of Engineering, becoming the first female professor to receive the university’s highest honour. She served as director of the museum’s Museum Studies Program from 1987 to 1989. One small example of her work on the field of archaeology was a small shiny copper and ceramic artifacts from prehistoric bronze, copper and copper artifacts.

She once stated that her father was an “Africanist. ” Because of the Nazi persecution of the Jews, her parents tried to send their only child to school in Britain when World War II broke out, but the British refused to issue a student visa to anyone under 18. In 1948, Franklin received her Ph. D. in experimental physics at the Technical University of Berlin. She began to look for opportunities to leave Germany after realizing there was no place there for someone fundamentally opposed to militarism and oppression. Franklin argued that the dominance of prescriptive technologies in modern society discourages critical thinking and promotes “a culture of compliance”. She once said: “There was no word of authority that could change either the laws of physics or the conduct of mathematics” She died in 2011 at the age of 89. She is survived by her husband, two children, and two grandchildren. She leaves behind a husband and a son. She had a daughter, a son and a daughter-in-law who are both active members of the Quaker community in Canada and the U.S. The author of The Real World of Technology, which is based on her 1989 Massey Lectures, and a collection of her papers, interviews, and talks, is also known as The UrsulaFranklin Reader: Pacifism as a Map. She died on September 16, 2011, in Toronto, at age 89. For confidential support call the Samaritans on 08457 90 90 90 or visit a local Samaritans branch or click here for details.

You want to know more about Ursula Franklin?

This page is based on the article Ursula Franklin published in Wikipedia (as of Nov. 01, 2020) and was automatically summarized using artificial intelligence.