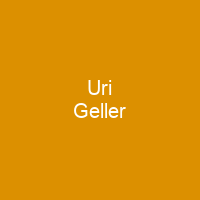 Uri Geller is an Israeli-British illusionist, magician, television personality, and self-proclaimed psychic. He is known for his trademark television performances of spoon bending and other illusions. Geller uses conjuring tricks to simulate the effects of psychokinesis and telepathy. His career as an entertainer has spanned more than four decades.

About Uri Geller in brief

Uri Geller is an Israeli-British illusionist, magician, television personality, and self-proclaimed psychic. He is known for his trademark television performances of spoon bending and other illusions. Geller uses conjuring tricks to simulate the effects of psychokinesis and telepathy. His career as an entertainer has spanned more than four decades, with television shows and appearances in many countries. In May 2002, he appeared as a contestant on the first series of the reality TV show I’m a Celebrity… Get Me Out of Here!, where he was the first to be eliminated and finished in last place. In July 2007 NBC signed Geller and Criss Angel for Phenomenon, a search for the next great mentalist; Geller won. In February 2008, Geller began hosting the TV show The Next Uri Geller, broadcast by Pro7 in Germany. In March 2008, he started the same show in the Netherlands, which shares a similar format to its counterpart in the Dutch television show Nieuwe Geller. During the show Geller speaks in both Hungarian and English. He claims that he is a distant relative of Sigmund Freud on his mother’s side. His mother and father were of Austrian-Jewish and Hungarian-Jewish background respectively. At the age of 18, he joined the Israeli Army’s Paratroopers Brigade, with which he served in the 1967 Six-Day War and was wounded in action. He worked as a photographic model in 1968 and 1969; during that time, he began to perform for small audiences as a nightclub entertainer, becoming well-known in Israel.

In 1975, he published his first autobiography, My Story, and acknowledged that, in his early career, his manager talked him into adding a magic trick to make his performances last longer. In June 1986, the Australian Skeptic reported that Geller had been paid A$350,000 and granted an option of 1,250,000 Zanec shares at 20c each until 5 June 1987. He starred in the horror film Sanitarium, directed by Johannes Roberts and James Eaves. In 2005, he starred in Uri’s Haunted Cities: Venice, a XI PicturesLion TV production for Sky One, which led to a behind-the-scenes release in early 2008 called Cursed; both productions were directed by Jason Figgis. By the mid-1980s, he was described as \”a millionaire several times over\”, and claimed to be performing mineral dowsing services for mining groups at a standard fee of £1 million. He also received attention from the scientific community, whose members were interested in examining his reported psychic abilities. Magicians and sceptics state that G Heller has been caught cheating and his performances can be duplicated by stage magic tricks. Geller also performs his standard routines of making watches stop or move from televisions, making spoons jump from tables, and moving tables and move faster. He has appeared in several reality TV shows, including The Successor, where the contestants supposedly displayed supernatural powers.

You want to know more about Uri Geller?

This page is based on the article Uri Geller published in Wikipedia (as of Nov. 30, 2020) and was automatically summarized using artificial intelligence.