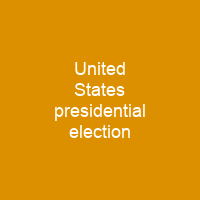 The Electoral College and its procedure are established in the U.S. Constitution by Article II, Section 1, Clauses 2 and 4. Each state casts as many electoral votes as the total number of its Senators and Representatives in Congress. Washington, D. C., casts the same number of electoral Votes as the least-represented state, which is three.

The election of the president and the vice president of the United States is an indirect election in which citizens cast ballots not directly for those offices, but instead for members of the Electoral College. The candidate who receives an absolute majority of electoral votes is then elected to that office. The Electoral College and its procedure are established in the U.S. Constitution by Article II, Section 1, Clauses 2 and 4; and the Twelfth Amendment. Each state casts as many electoral votes as the total number of its Senators and Representatives in Congress, while Washington, D. C., casts the same number of electoral Votes as the least-represented state, which is three. In 1961 the Twenty-Third Amendment granted a number of electors to the District of Columbia, an amount equal to the number of delegates in both houses of Congress, combined. However, U. S. territories are not allocated electors and therefore are not represented in the electoral College. There are no provisions that specifically address this behavior; those who vote in opposition to the plurality are known as \”faithless\” or “unpledged’ electors. In modern times, faithless and unpledged electors have not affected the ultimate outcome of an election, so the results can generally be determined based on the state-by-state popular vote. Most of the time, the winner of a US presidential election also wins the national popular vote, but there were four exceptions since all states had the electoral system we know today. The nomination process, consisting of the primary elections and caucuses and the nominating conventions, was not specified in the Constitution, but was developed over time by the states and political parties.

These primary elections are generally held between January and June before the general election in November, while the nominating convention are held in the summer. The presidential candidates from the major political parties usually declare their intentions to run as early as the spring of the previous calendar year before the election. In May, the first presidential election in 1789, only 13 states chose electors by popular vote by any form of popular vote; Gradually throughout the years, states began conducting their own slate of elections to choose their slate of electors. During the presidential election of May 6, 2012, only 12 states chose their electors by the popular vote of any of the original 13 states, and only the state of New Hampshire chose its own electors. The presidential term begins on Inauguration Day, which since the passage of the Twentieth Amendment has been set at January 20. Since 1845 has been the first Tuesday after November 1. Congress then certifies the results in early January, and the presidential term begin on In inauguration Day. This date coincides with the general elections of various other federal, state, and local races; since local governments are responsible for managing elections, these races typically all appear on one ballot. There were four exception since 1876, 1888, 2000, and 2016 and were all losses of three percentage points or less.

You want to know more about United States presidential election?

This page is based on the article United States presidential election published in Wikipedia (as of Jan. 04, 2021) and was automatically summarized using artificial intelligence.