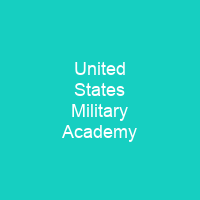 The United States Military Academy is a four-year federal service academy in West Point, New York. About 1,300 cadets enter the Academy each July, with about 1,000 cadets graduating. Most graduates are commissioned as second lieutenants in the Army. Foreign cadets are commissioned into the armies of their home countries.

The United States Military Academy is a four-year federal service academy in West Point, New York. It is the oldest of the five American service academies. About 1,300 cadets enter the Academy each July, with about 1,000 cadets graduating. Most graduates are commissioned as second lieutenants in the Army. Foreign cadets are commissioned into the armies of their home countries. Its alumni and students are collectively referred to as \”The Long Gray Line,\” and its ranks include two U.S. Presidents. It was the first American college to have an accredited civil engineering program and the first to have class rings. Its football team was a national power in the early and mid-20th century, winning three national championships. Among the country’s public institutions, the academy is the top producer of Marshall and Rhodes scholars. The entire central campus is a national landmark and home to scores of historic sites, buildings, and monuments. The majority of the campus’s Norman-style buildings are constructed from gray and black granite. The campus is also a popular tourist destination, with a visitor center and the oldest museum in the United States Army. The academy bases a cadet’s leadership experience as a development of all four pillars of performance: academics, character, physical, and military. The academic program grants a bachelor of science degree with a curriculum that grades cadets’ performance upon a broad academic program, military leadership performance, and mandatory participation in competitive athletics. The cadets adhere to the Cadet Honor Code, which states that \”a cadet will not lie, cheat, steal, or tolerate those who do.

Since 1959, cadets have also been eligible for an interservice commission in one of the other armed services provided that they meet that service’s eligibility standards. The Academy’s traditions have influenced other institutions because of its age and unique mission. The Continental Army first occupied West Point on 27 January 1778, and it’s the oldest continuously operating Army post in the US. The Army changed the name of the fortifications at West Point to Fort Clinton after the American Revolutionary War, when Benedict Arnold committed his act of treason, attempting to sell the fort to the British. The fortifications were known as Fort Arnold during the war, as commander as commander of the British Colonies. After the peace, various ordnance and military stores were left at the garrison since 1794, and the garrison became known as West Point. The high ground above the Great Hudson River enabled the Continental Army to prevent the Royal Navy ships from sailing upriver and thus dividing the British Army from the American Navy. The Fort commanded the high ground between the river and the Hudson River for the duration of the Revolutionary War. General Alexander McDougall named it Fort Putnam, General. Arnold commanded the British during the War of 1778-1794, when the British left the fort and moved to New York City. The Fort was later renamed Fort Clinton, after the President of the unrecognized breakaway Confederate States of America.

You want to know more about United States Military Academy?

This page is based on the article United States Military Academy published in Wikipedia (as of Dec. 03, 2020) and was automatically summarized using artificial intelligence.