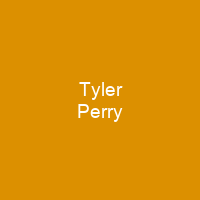 Tyler Perry is an American actor, writer, producer and director. Perry created and performs the Madea character, a tough elderly woman. His films vary in style from orthodox filmmaking techniques to filmed productions of live stage plays. In 2011, Forbes listed him as the highest-paid man in entertainment, earning US$130 million.

About Tyler Perry in brief

Tyler Perry is an American actor, writer, producer and director. Perry created and performs the Madea character, a tough elderly woman. His films vary in style from orthodox filmmaking techniques to filmed productions of live stage plays. In 2011, Forbes listed him as the highest-paid man in entertainment, earning US$130 million between May 2010 and May 2011. Perry has acted in films not directed or produced by himself, including as Admiral Barnett in Star Trek, Tanner Bolt in Gone Girl and Colin Powell in Vice. Perry is included in Time magazine’s 100 Most Influential People of 2020. Perry’s first movie, Diary of a Mad Black Woman, went on to gross US$50 million domestically, while scoring a 16% approval rating at the web review site Rotten Tomatoes. Perry made his directorial debut on his next film, an adaptation of Madea’s Family Reunion, and directed all of his subsequent film productions. He has also written and produced many stage plays during the 1990s and early 2000s, including I Know I’ve Been Changed and The Haves and the Have Nots. In October 2012, Perry struck an exclusive multi-year partnership with Oprah Winfrey and her OWN Network. The partnership was largely for the sake of bringing scripted television to OWN, based on Perry’s previous success in this area. Perry did not complete high school, he earned a GED, and he was molested by a friend’s mother at age 10; he later learned his own father had molested his friend.

A DNA test taken by Perry indicated that Emmitt Sr. was not Perry’s biological father. At age 16, he had his first name legally changed from Emmitt to Tyler in an effort to distance himself from his father. In his early 20s, Perry heard someone describe the sometimes therapeutic effect the act of writing can have, enabling the author to work out his or her own problems. This comment inspired him to apply himself to a career in writing. In 1998, at age 28, he succeeded in retooling the play and restaging it in Atlanta, first at the House of Blues, then at the Fox Theatre. The play included Christian themes of forgiveness, dignity, and self-worth, while addressing issues such as child abuse and dysfunctional families. Perry continued to create new stage productions, touring with them on the so-called “Chitlin’ Circuit” and developing a large, devoted following among African-American audiences. In 2005, Forbes reported that he had sold more than USD 100 million in tickets, USD 30million in videos and an estimated USD 20million in merchandise. Perry raised a US$5million in part from the ticket sales of his stage productions to fund his first film, Madea, which went on opening weekend February 24–26, 2014. The film has since been a box-office success and grossed over US$26 million. Perry was named one of Forbes’ 100 Most influential people of the year in 2012.

You want to know more about Tyler Perry?

This page is based on the article Tyler Perry published in Wikipedia (as of Dec. 09, 2020) and was automatically summarized using artificial intelligence.