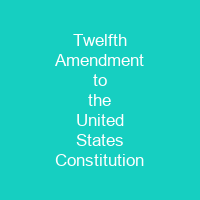 The Twelfth Amendment to the United States Constitution provides the procedure for electing the president and vice president. The amendment was proposed by the Congress on December 9, 1803, and was ratified by the requisite three-fourths of state legislatures on June 15, 1804. The new rules took effect for the 1804 presidential election and have governed all subsequent presidential elections.

About Twelfth Amendment to the United States Constitution in brief

The original rules were used for the 1796 and 1800 presidential elections – showing that the original system resulted in a President and Vice- president who were political opponents. The Twelfth amendment replaced the procedure provided in Article II, Section 1, Clause 3, by which the Electoral Council originally functioned. It also established that the Senate would hold a contingent vote for vice-president if no candidates won a majority in the presidential vote, and provided that no individual ineligible to be vice president was eligible for the position. The quorum for this purpose shall consist of a member or members from two-thirds of the states, and a majority of all the states shall be necessary to a choice. The person having the greatest number of votes for President, shall be the President, if such number be a majority  of the whole number of Electors appointed; and if no person have such majority, then from the persons having the highest numbers not exceeding three on the list of those voted for as President, the House of Representatives shall choose immediately, by ballot, the President. And if the House of Representatives shall not choose a President whenever the right of choice shall devolve upon them, before the fourth day of March next following, then the Vice-President shall act as President as in the case of the death or other constitutional disability of the President of the United Sons of the United  States.

You want to know more about Twelfth Amendment to the United States Constitution?

This page is based on the article Twelfth Amendment to the United States Constitution published in Wikipedia (as of Dec. 06, 2020) and was automatically summarized using artificial intelligence.