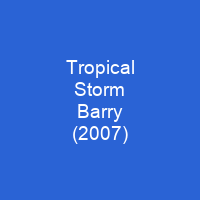 Tropical Storm Barry was the second named storm of the 2007 Atlantic hurricane season. Barry developed from a trough of low pressure in the southeastern Gulf of Mexico on June 1. It was the first tropical storm to make landfall on the U.S. mainland in more than a decade.

About Tropical Storm Barry (2007) in brief

Tropical Storm Barry was a rapidly forming tropical cyclone that made landfall on Florida, United States, in early June 2007. Barry developed from a trough of low pressure in the southeastern Gulf of Mexico on June 1. It tracked rapidly northeastward, reaching peak winds of 60 mph before weakening and making landfall near Tampa Bay as a tropical depression. Barry quickly lost tropical characteristics after wind shear removed much of the convection, and early on June 3 it completed the transition into an extratropical cyclone. In Florida, Barry dropped a moderate amount of precipitation across the drought-ridden state; rainfall peaked at 6. 99 inches. The rain caused some flooding and wet roads, which led to two indirect traffic fatalities. Rough seas killed one Florida surfer in Pinellas County. In Georgia, the precipitation assisted firefighters in combating severe wildfires. The precursor trough produced heavy rainfall across the western Caribbean Sea, which on Cuba unofficially reached over 7.

8  inches. Outer rainbands in Pinar del Río Province injured three people and damaged 55 houses. Barry was the second named storm of the 2007 Atlantic hurricane season, and the first in the United States. It was the first tropical storm to make landfall on the U.S. mainland in more than a decade. The remnants of Barry were absorbed by a larger extratropicals cyclone late on June 4, and by a tropical storm near the border between the S.C. state of Maine and the Canadian province of Coinciding with the Canadian coast on June 5. It is estimated the system developed into a tropical. cyclone at 1200 UTC on June1 just to the northwest of the western tip of Cuba. The National Hurricane Center initiated advisories on Tropical Storm Barry at 2100 UTC in the early hours of June 1 while the storm was centered about 235 miles west of Key West, Florida. The storm was not classified until eleven hours later.

You want to know more about Tropical Storm Barry (2007)?

This page is based on the article Tropical Storm Barry (2007) published in Wikipedia (as of Nov. 21, 2020) and was automatically summarized using artificial intelligence.