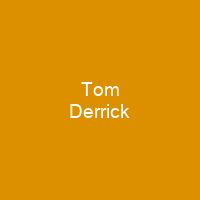 Thomas Currie Derrick, VC, DCM was an Australian soldier and a recipient of the Victoria Cross. In November 1943, during the Second World War, Derrick was awarded the VC for his assault on a heavily defended Japanese position at Sattelberg, New Guinea. He died from his wounds on 24 May 1945.

About Tom Derrick in brief

Thomas Currie Derrick, VC, DCM was an Australian soldier and a recipient of the Victoria Cross. In November 1943, during the Second World War, Derrick was awarded the VC for his assault on a heavily defended Japanese position at Sattelberg, New Guinea. Derrick was born in the Adelaide suburb of Medindie, South Australia, on 20 March 1914 to David Derrick, a labourer from Ireland, and his Australian wife, Ada. In 1928, aged 14, Derrick left school and found work in a bakery. As the Great Depression grew worse he lost his job and moved to Berri, working on a fruit farm before marrying in 1939. In July 1941, Derrick enlisted in the Second Australian Imperial Force, joining the 248th Battalion. He was posted to the Middle East, where he took part in the Siege of Tobruk, was recommended for the Military Medal and promoted to corporal. In April 1945 his battalion was sent to the Pacific island of Morotai, an assembly point for the Allied invasion of the Philippines. Engaged in action the following month on the heavily defended hill Freda on Tarakan Island,Derrick was hit by five bullets from a Japanese machine gun. He died from his wounds on 24 May 1945. Derrick’s diving in the Port River earned him the nickname of “Diver”. By this time, he had developed a keen interest in sports, particularly cricket, Australian Rules Football, boxing and swimming. Derrick thrived as a soldier, but found military discipline difficult to accept. In October, the 248st Battalion paraded through the streets of Adelaide to Mitcham station for its embarkation for its Middle East training.

On arrival in Palestine, Derrick began training in desert warfare events. For the battalion’s arrival at El Kantara, Derrick set up up a sports centre for relaxation and relaxation, set up a swimming pool for the men and women in the unit, and was soon in more trouble and charged for punching another soldier who taunted him over an incident. He later moved on to a full-time job at a nearby fruit farm, remaining there for the next nine years. On 24 June 1939, Derrick married Clarance Violet “Beryl” Leslie—his “one true love” whom he had met at a dance in Adelaide seven years earlier—at St Laurence’s Catholic Church, North Adelaide. The couple had a son, Thomas Currie, who was born on 5 July 1940, and later moved to the 26th Battalion, 26th Brigade, a private. Derrick and Clarance were married on 24 June 1941, and had a child, Tom Currie. In February 1943, Derrick transferred to the South West Pacific Theatre where he fought in the battle to capture Lae. Derrick returned to Australia with his battalion in February 1944, before transferring to an officer cadet training unit, being commissioned lieutenant in November 1944. In January 1945, Derrick went to the annual Royal Adelaide Show to accept a challenge of staying upright for three rounds with the ex-lightweight champion of Australia.

You want to know more about Tom Derrick?

This page is based on the article Tom Derrick published in Wikipedia (as of Oct. 30, 2020) and was automatically summarized using artificial intelligence.